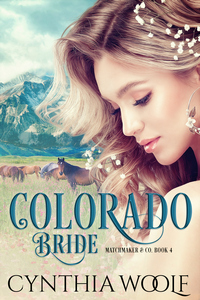 Emily Loring survived the last few years as a governess to a rich family’s children. But when the lord of the house can’t keep his hands to himself, she’s left with no option but to risk everything as a mail-order bride. Raised in a New York orphanage, she’s always dreamed of a husband and children of her own, but even that small dream always felt out of reach. The city is all she’s ever known, but the promise of a family, a place to call home, drives her to risk everything and head for the wilds of the Colorado Territory, and the arms of a stranger.

Ben Logan fell in love once, to a city girl who left him at the altar to run off with another man. A mail-order bride appears to be the answer to his need for a wife to warm his bed, as long as she loves the country life as he does. He doesn’t need much, but he won’t risk his heart again. When Emily arrives, her curves tempt him nearly as much as her smile. But his ex-fiancée is back, and determined to have Ben for herself, even if it means murder…