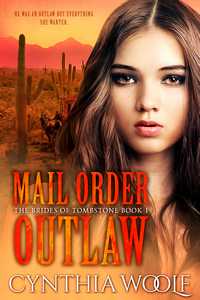 Ed Talbot isn’t husband material. He’s an outlaw, was forced into his father’s gang at the age of thirteen, and is wanted Dead or Alive in more than one territory. But now his father is dead, he hates the life, the blood, and his brother’s rages. When a stagecoach robbery goes awry, Ed ends up with a satchel full of charming letters from an enticing young miss. Unfortunately for Miss Lizzie Cobb, her betrothed is now dead, and Ed Talbot sees a way out. Impersonating a fine, upstanding young man shouldn’t be too difficult. Despite the risks, falling in love with her proves to be all too easy.

Isolated on her mother’s ranch just outside of Tombstone, Miss Lizzie Cobb doesn’t have the time or the means to find a respectable husband. As a half Apache woman in the Arizona Territory, being a mail order bride seems like the only solution to her problem until she realizes that San Francisco is too far away, and she’ll have to leave her vulnerable mother and baby brother behind. Her solution? Call off the wedding.

When her groom shows up on her doorstep, she’s shocked. He’s handsome, strong, and has traveled hundreds of miles to claim her. His kisses inflame her body and his presence soothes her soul. Falling for the rugged man is beyond her control. But the past has a way of catching up to outlaws, and facing the truth is going to be hard…for both of them.