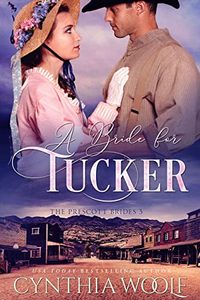 From a USA Today Bestselling Author…

Five lady outlaws sent to prison for bank robbery. Their sentences commuted to time served if they become mail-order brides.

Five brothers looking for wives, take a chance on the outlaw brides.

Will they find happiness or heartache?

This is Ivy’s story.

Ivy Sheahan was married to the man she loved…for a full three months before he was killed in the in a robbery of the mercantile in Flagstaff, Arizona Territory. Heart sick she finally moved to Prescott where she had friends, twins Maisie and Lottie MacSheehy.

Together with her friends she robbed the Prescott Bank and was sentenced to five years.

Two and a half years later, she and her friends were given the opportunity to get the remainder of their sentence dismissed…if they became mail-order brides to the Campbell brothers…of Prescott, Arizona Territory.

Tucker Campbell was betrayed by his fiancé and his best friend. He doesn’t trust easily, but when he sees Ivy, all that changes and he falls head over heels in love for the first time in his life.

It appears that Ivy and Tucker have a wonderful life ahead of them but someone wants Ivy dead and will stop at nothing to see that happen.

Will Tucker and Ivy find happiness together or will an unknown assailant bring their dreams to a crashing halt?