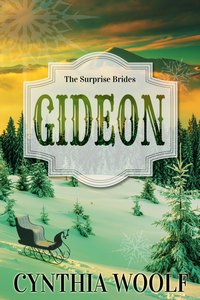 As the local preacher, Gideon Fraser often talks about the many virtues of a good marriage, but that doesn’t mean he has the slightest inclination of claiming a bride of his own. No, he’s been burned before, by greedy women who only want the prestige and money the Fraser family name can provide. When his mother’s devious matchmaking results in his unexpected wedding, Gideon looks at the beautiful face of the woman who has sworn to be his and wants nothing to do with her. But Gideon is in danger of losing his heart until he discovers the truth. His new wife lied to him…about everything.

Ruby Haller needed a husband and fast. A treacherous man promised her the world, took her virginity, and left her without a father for her unborn child. When her father, the town minister, found out she was expecting a child, he offered her hand in marriage to the meanest man in town. Becoming a mail-order-bride appeared to be a safer choice. But instead of a rancher, she ends up the wife of a stubborn, bull-headed preacher and he’s none too pleased when he discovers her duplicity. Worse? The local town beauty, who had been courting him for years, is determined to make her life a living hell.

But Angel Springs, Colorado is a small town that can inspire big dreams. It’s nearly Christmas, and as these two hearts heal, a holiday miracle just might be within reach.