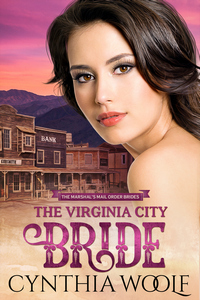 If Jared Winslow didn’t have bad luck, he wouldn’t have any. Forced to leave his home in Chicago or face the hangman’s noose, he’s supposed to lay low and stay out of trouble. He’s not supposed to become a U.S. Marshall in The Nevada Territory. And he’s not supposed to order himself a mail-order-bride. But Jared wants a real life. A home. A family. And he’s not going to allow Lady Luck, or false allegations against him stop him from living his life.

When Angelica Riley arrives, he’s smitten. She’s kind, beautiful and generous. She wants what he does, a family, stability. A home. But he isn’t the only one who finds her allure impossible to resist. A local troublemaker has decided that Angelica will be his. Her loyalty to Jared–and the promise she made him to become his wife–only angers a man who is used to taking anything he wants.

Obsession turns deadly and a woman with an uncanny resemblance to Angelica is violently murdered. Jared knows his enemy will stop at nothing to take his new bride. The question now is can Jared stop him or will his past–and Lady Luck–take everything from him this time, not only his life, but the woman he has grown to love.