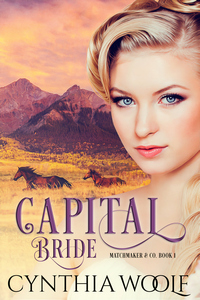 Unexpectedly homeless, un-wed mother Sarah Johnson has few options. They could go live with her cousin William, but Sarah believes there’s something untoward about his offer and it leaves her feeling uncomfortable. She’s qualified to be a governess, but no one will have her because she wasn’t married when she had her precious MaryAnn. Matchmaker & Co could be her salvation as mail-order-bride to Mr. John Atwood.

Single father, John Atwood, is raising his daughter the best he can in the wilds of the Colorado Territory but knows he needs help. No woman he knows wants to take on the raising of his daughter who hasn’t spoken since she saw her mother brutally murdered during a bank robbery. Can Sarah, John and their two daughters overcome their pasts and find happiness together?

On the other side of the door was her last resort. Either this or prostitution and prostitution was not a choice. She couldn’t raise MaryAnn in that environment, nor if truth be told, could she lower herself to live like that. At least this way there would be some stability in her little girl’s life.

Sarah took a deep breath, turned the knob, and walked through the door to a better future for her daughter and, if she were lucky, for herself.

The office was small and precisely kept. A single desk with a straight, high backed wooden chair, one in front and one behind, sat in the middle of the room. She’d noticed the flowered curtains were open on the way in, curtains tied to the side. The small area was flooded with dazzling afternoon light. The walls were whitewashed and the desk well organized. There were several tables with neat piles of files along one wall. The other wall held several rows of pictures of women and men. None smiling, as that was the way pictures were taken, but all appeared to be wedding pictures. Below each picture was a small brass place with the names of the bride and groom and the date of the wedding.

A small, woman in her late thirties with fiery red hair, sat behind the desk. When Sarah got closer she saw gorgeous dark blue eyes behind the wire rimmed glasses perched on the end of her nose. Her eyes were so dark a blue they could almost be called violet. They were striking and clear, honesty shone from them along with a “no nonsense” attitude.

“May I help you?” the woman asked.

“Um. Yes. My name is Sarah Johnson. I saw your advertisement for mail order brides.”

The woman looked Sarah over, taking in her clothes, her hands clasped in front of her and ending at her face.

“First, let me introduce myself. I’m Margaret Selby and I own Matchmaker & Company. Please, sit down. You’re older than the women we usually have. You’re also better dressed and don’t appear to be hungry. What would bring someone like you to my door?”

“I’ve been living with my great aunt. She passed away suddenly two weeks ago and the lawyer says I need to find other lodgings. My cousin, William, has inherited everything except a small stipend she left for me. William is selling everything. MaryAnn and I have nowhere else to go.”

Now was not the time to be less than truthful, if she wanted this woman’s help. “No.”

“Tell me, Miss Johnson, how did you come to find yourself with child at age twenty-two without being married? Surely you knew how those things happened by that age.”

“My fiancé was killed at Bull Run.”

“I understand. Many fine men were killed there and throughout the war.”

“Yes, they were. Lee and I planned on marrying before he left. He still had two weeks before he was supposed to go back. He was sure the war wouldn’t last long,” she sniffled and blew her nose into her handkerchief. “They called him back early, and then he was killed.”

“No need to go into further detail, Miss Johnson. Let’s get down to business, shall we?”

Sarah sat straight in the chair. “Yes, of course.”

She was more nervous now than she had been showing up on Aunt Gertrude’s doorstep six years ago, pregnant and unwed. They’d planned on putting out the story that Lee was her husband but one of the servants overheard and passed the information on to other servants, some of them in the homes of her Aunt’s friends.

Aunt Gertrude took it all in stride. She actually handled it far better than Sarah had. She’d cried for days until Gertrude shook her and said to get under control and stop feeling sorry for herself. So she’d had her beautiful MaryAnn and was raising her with Aunt Gertrude’s help. She would be missed for so many reasons.

“It’s Mrs. Selby. Now, please pay attention. I have several candidates that might work for you. Two farmers in Kansas and a rancher in the Colorado Territory.”

“Do you have a recommendation?”

“Well, neither farmer has children, though they are not unwilling to consider a woman with children. It would be awfully lonely for your MaryAnn with only you and her new stepfather for company. The rancher, on the other hand, also has a daughter, who is seven, I believe. They would be able to keep each other occupied while you attend to the work you’ll need to do. Can you cook?”

“Yes. Our cook taught me the basics. If I have a recipe, I can follow it.”

“Then, I suggest you write down all of your cook’s recipes. You’ll need them no matter which man you choose.”

“I’ve already got the ones I want. I’d hoped to put them together in a book one day. These men you’re talking about, how old are they?”

“Have you checked out these men?”

“Of course. I’m very thorough, Miss Johnson. I have an associate who travels for me and talks at length to each of our bachelors. We don’t have any brutes or other disreputable types with this agency. You can put your mind at rest.”