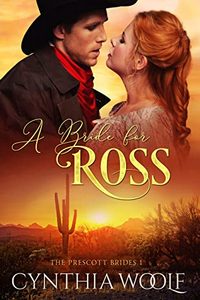 Five lady outlaws sent to prison for bank robbery. Their sentences commuted to time served if they become mail-order brides.

Five brothers looking for wives, take a chance on the outlaw brides.

Will they find happiness or heartache?

Fiona O’Neill served half of her prison sentence and then was offered the chance to get out if she agreed to be a mail-order bride to one of the Campbell brothers.

She jumped at the chance. She’d robbed the bank to get the money to ransom her two-year-old son who was kidnapped by the boy’s father. She’d never given up the location of the money. Neither had any of the other women. When she was out and married, she would be living on a ranch just ten miles north of Prescott, where they’d robbed the bank. She began planning how to get her son from his outlaw father, Black Bart.

Could she slip away from her new husband? What if he found out?

Ross Campbell had been a single father for more than two years ever since his wife was brutally murdered in a stagecoach robbery by the outlaw, Black Bart. When he finds out that the prison is starting a mail-order bride program for non-violent lady outlaws, he agrees to the program for him and his brother’s as long as the outlaw’s woman, Fiona O’Neill, is one of the brides.

What will happen when two people with opposing agendas are married? Who will be the winner? Can they both win?

Find out in the newest book by Cynthia Woolf, A Bride for Ross. Book 1 of The Prescott Brides.