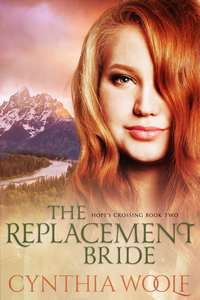 Jesse Donovan spent the last four years chasing gold, hoping to convince his New York fiancee to join him. He’s now rich, successful, and eager for his wife-to-be to make the trip out west. But now that it’s time to travel to Hope’s Crossing and marry Jesse, the New York socialite sends him a letter informing him of her intention to marry another. Heartbroken and lonely, Jesse contacts Matchmaker & Co. for a mail order bride.

Clarissa “Clare” Griggs is the eldest daughter of a poor farmer who is barely surviving off the land. At twenty-three, she is an old maid and a burden on her family. Clare knows what love looks like, and she wants a family of her own. Volunteering as a mail order bride seems to be the perfect answer to her dilemma. Her family will be better off, and she can find her own love story, happiness and finally become a mother.

But Hope’s Crossing isn’t the ideal location that Jesse or Clare dreamed. A bitter rival is trying to kill Jesse and take his mine. Jesse’s broken heart won’t allow him to love Clare the way she needs, and Clare refuses to live with a man who doesn’t love her. When the enemy threatens Clare’s life, Jesse realizes Clare has become a part of him, a vital piece of his heart and soul — but is he too late?