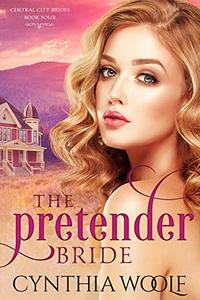 Lost and alone after her step-father is murdered on the streets of New York, Katie takes her two young siblings and claims them as her own. Pretending to be a widow, she flees to Colorado Territory as a mail-order bride and into the arms of the handsome gunsmith, Robert Wallace. The attraction is instant, but just when things are looking up for her, the past comes calling–and Katie discovers harsh truths about her stepfather that put everything at risk. Her stepfather had secrets, and they’re not done with her yet.

Robert Wallace was a skeptic until he watched his friends settle happily with their mail-order brides. When his own seemingly perfect family arrives, he’s thrilled. Until he discovers his new bride is surrounded by layer-upon-layer of lies. He’s been tricked by a scheming woman before and he won’t be taken in by another one, no matter how innocent she seems. No matter how badly he wants her.

Katie is determined to keep her new family together, come hell or high water. And no one is going to get in her way. Not the man from New York who followed her to Colorado. Not her past. And not the stubborn, irresistible Scot who is her husband.