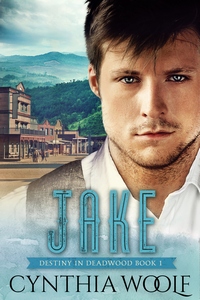 Jake Anderson killed a man defending his fiancée from a brutal attack, but lost her and his freedom in the process. Now he’s on the run, hunted by one of her murderers and tormented by the need for vengeance.

Becky Finnegan will do anything to escape her drunken father’s fists, including slave away at their mine. Her only hope is to strike gold and make a new life for herself somewhere far, far away from Deadwood. But then Jake arrives and does the unthinkable…forces her to feel, to hope…and to love.

Jake would give his life to protect Becky, but all he can offer her is a broken heart, a criminal’s life, and a past haunted by failure. How can he save her when he’s already lost himself? When the devil catches up to him, will he destroy everything, or can the beautiful rebel redeem Jake’s lost soul?

The iron pressed against Jake Anderson’s back was almost as cold as the rain pouring out of the night sky.

“Knock on the door,” demanded his brother Zach, his voice angry and on edge.

Jake did as he was told and pounded on the front door, hard enough to be heard over the din of the rain.

“What the hell?” said his eldest brother, Liam, when he opened the door. “Jake? Zach? What are you two doing here? It’s the middle of the night.”

Zach growled from behind Jake. “Are you going to let us in or make us stand in this rain all night?”

“Can’t until the kid here,” he poked Jake in the back with the gun, “is inside and we’ve talked to you.”

Jake walked into the foyer of the house his oldest brother owned in St. Louis. Steamer trunks and carpet bags lined the hallway down to the parlor.

“Sorry to do this to you, Liam. I know you’re leaving tomorrow,” said Zach, laying his hat on one of the trunks.

Jake threw his hat on the trunk next to Zach’s.

“Yes. At first light. Now, tell me what’s going on and why you brought Jake here at gun point,” said Liam.

“Only way I could get him to come.”

“And?” Liam said, exasperated. “Don’t make me beat the story out of you word by word, little brother. Just tell me the problem.”

Liam pointed at the two chairs in front of the fire, then went to the fireplace and stoked the banked coals to life. He added a piece of wood to the tiny flames before he turned once again to face them. “Jake. You first,” he said in a tone that brooked no argument.

“I killed an army captain,” Jake said, refusing to sit. He couldn’t sit. Couldn’t be still. He wanted to scream at the injustice, shout at God for his betrayal.

“Why’d you do a damn fool thing like that?”

Jake shrugged. “I didn’t have a choice.”

Zach put away his gun. “No, there’s not,” said Zach. “There was reason for it, but he did kill the man. I use the word ‘man’ loosely.”

“Damn it, Jake. They’ll hunt you down and hang you for this.” Liam had been a colonel with seventeen years service, Jake knew he was familiar with military justice.

“The son of a bitch deserved to die. And as soon as I can, I’m going to kill the other bastard, too.”

“Jesus! You two had better tell me what’s going on. Start at the beginning.”

Jake began to pace. The hardwood creaked under his weight and small droplets of water from his wet boots followed in his wake. He swallowed hard and took a deep breath. He didn’t want to relive that moment when he’d lost Elizabeth, but he knew he had to. For Liam. So he’d understand.

“I went to see Elizabeth just like I did every day, just to snatch a few minutes together.” His voice broke and he paused, gathering himself to face the memory. “Her mother and aunt kept her pretty busy with wedding plans so we didn’t get to see much of each other.

“When I got there, I heard a gunshot come from the house. I ran to the door but the damn thing was locked and I had to break it down. I lost precious moments doing that. When I got to the parlor, there were two men standing over Elizabeth. Her face was bloodied.” Jake’s voice cracked.

As if the memory were there, right there, and he was watching it all over again, he felt the color flee his face as he remembered Elizabeth’s. He wet his lips and continued on choked words. “Her dress was ripped, skirt bunched around her waist. The one holding the gun was a colonel and the other was a captain. Both in full uniform. The bastard captain was buttoning his pants when I walked in. I shot him on the spot.

“As soon as the colonel saw me, he ran out the other door toward the kitchen. I followed but he was on his horse and riding away by the time I reached the back door.”

Jake stopped. His body shook. His hands fisted and white knuckled. He took several deep breaths to quell the tears before he could continue.

He watched his brothers eyes fill with pity and he knew he had to finish.

Jake continued as though he were reciting a story. It was the only way he could get through the whole thing, the only way he could relive those moments. “When I got back to the parlor, I went immediately to Elizabeth and got down on my knees beside her. The bastard colonel had shot her in the chest, but she was still breathing. She opened her eyes. They were filled with terror until she realized who I was.” His voice cracked. He paused. It was too fresh. The memory too new and painful. Rage filled him.

“I tried…tried to stop them…stop John but,” she whispered. “I love you, Jake.”

“She closed her eyes and took her last breath in my arms. I held her for I don’t know how long. Finally, I picked her up and laid her on the sofa. I went back to the captain, made sure he was dead and then looked through his pockets to find out anything I could about the colonel.”

“After he’d kicked the shit out of him,” interjected Zach.

“The captain was John Longworth. Elizabeth was engaged to him before we fell in love and she left him to marry me. Longworth was her father’s choice, not Elizabeth’s. She told me stories of the way he treated her. He used to hit her, never where it would show, never where her father could see. I showed her that not all men were monsters. He’d come a long way to do this to her. His papers said he was stationed at Fort Leavenworth.”

Liam turned to Zach. “Isn’t that where you’re assigned?”

“It was,” responded Zach angrily.

“Let the kid finish his story. Then, I’ll get to mine.”

“I didn’t know what to do, but I thought I was doing the right thing and went to the sheriff. I explained what I saw and what I did. Then I went to Mayor Green’s office and told him. He sent someone to Aunt May’s to fetch Elizabeth’s mother. I didn’t want Mrs. Green to come home and find the mess and Elizabeth….”

Jake paused and took a deep breath, needing the air to clear his mind and relaxed his hands not realizing he’d fisted them again until he stopped talking. “After that I went back to her house. The sheriff had already had the undertaker get the bodies. With Elizabeth gone, there wasn’t any reason to stay, so I walked and walked. I walked all night and somehow ended up at home.

He ran a hand through his hair, still wet on the ends from the downpour outside. “The sheriff came out to my house in the morning, brought my horse with him and took my statement again. That’s when I found out there was another version of what happened. The asshole that got away was Richard Jordan. The bastard told Elizabeth’s father that I’d raped and killed her in a fit of drunken rage and then shot the captain when he tried to stop me. Luckily for me, the sheriff didn’t believe him, because I’d gone to him right away and he knew I wasn’t drunk and wasn’t raging against anyone but the sons-a-bitches that did it.”

Jake slumped into a chair, his legs no longer able to support him after reliving the whole bloody mess again.

Zach took over the tale. “That’s where I come in. The colonel was visiting the fort. Longworth was an old friend of his. Colonel Jordan ordered me and my unit to go with him to arrest Jake. He didn’t know we’re brothers. Colonel Jordan is determined to see Jake hang to protect his career and his own neck. He wants Jake to be tried for murder in an army court. The long and the short of it is, I cold cocked the colonel, my men looked the other way, and I grabbed Jake and ran.”

Zach leaned forward and hung his hands between his knees. “Now we’re both here and on the run from the law. If they catch us, I’ll be court-martialed for attacking a superior officer and for desertion. Jake will be tried for the murder of the captain.”

“Shit!” Liam turned his back on them, his frustration palpable and stared into the flames that were now crackling merrily. “Why’d you come here? I have the kids to think of.”

“We’re not trying to involve you and the kids. I knew you were leaving tomorrow. I wanted to see you before we disappear completely,” said Zach.

Jake, still numb, watched his oldest brother pace the carpet as Jake had been doing only minutes before. “Liam, I…” Guilt choked the words away.

“What about the sheriff and her father, the mayor? Don’t they believe you?” asked Liam.

Jake sat back in the chair. He hadn’t slept since the murder happened. Was it really only two days ago? His mind and body were beyond exhaustion. His nerves raw. “The sheriff believes me and didn’t arrest me. Mayor Green trusts the colonel because he is a colonel and a friend of Elizabeth’s ex-fiancé, Longworth. Jordan has the mayor convinced he and the captain came upon me and I shot the captain. Her father never did cotton to Elizabeth marrying me, a simple farmer, when she could have been a captain’s wife.”

Liam looked at them both. It was a long time before he spoke like he was calculating everything in his mind, weighing each word before he made a decision. “I know you’d like nothing better than to rest, but we can’t. We leave now. Start packing the wagon. We need to make as much distance as we can before we stop tomorrow. It’s going to be a long journey.”

“Where are we going?” asked Jake, clutching the bag, though he didn’t much care where they went. Everything that mattered in his life was gone.

“Deadwood. In the Dakota territory,” said Liam. “I bought a claim.”