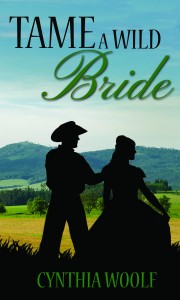 The question I get asked most often is where do you get your ideas from? They can come from anywhere. My first western was inspired by my parents love story. My first scifi romance was based on a dream I had as a teenage. My last western was again based on my parents who corresponded after meeting one summer, until Dad asked Mom to marry him. That made me think of mail order brides and Tame A Wild Bride was born.

My new series is also a mail order bride series. There are so many opportunities for stories there because there were so many different reasons that women would offer themselves up as brides. The most common of course was the lack of men in the east and surplus of them in the west.

Some of these unions lasted for fifty years and were happy ones. Others lasted only one hour. Yes, you heard me an hour. The woman in question discovered as she and her new husband that he was the one who robbed her stage on the way to town. She recognized the scar on his hand. She screamed ran from the room and locked herself in the bedroom. When she finally came out, her new husband was gone and the poor bewildered preacher and his wife were told that it never happened. The woman went back to her home, unmarried.

So there you have it. Ideas come from anywhere and can hit you anytime. I carry a notepad in my purse for just such occasions

If you’re an author where do you get your ideas from? If you’re a reader, have you ever seen something or someone and asked yourself, what if? That’s what author’s do. What if so and so met such and such and did this and that. It all starts with What if?

Leave me a comment to be entered into a drawing for a $5 Starbucks card.

12 thoughts on “Where do you get your ideas from?”