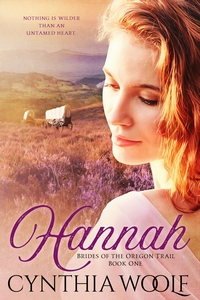 Desperate times call for desperate measures, so when Hannah Granger’s little sister takes off for Oregon with a group of mail-order brides to meet her new husband, Hannah has no choice but to follow. She expects her sister to find trouble, and she does. But what Hannah doesn’t expect is to fall for the hired gun traveling with the wagon train as they make their way along the treacherous Oregon Trail. The bounty hunter is tall, dark and dangerous, everything she’s avoided her entire life. But when she begins to suspect criminals are riding just four wagons back, she’ll do just about anything to convince him to listen…and to protect her fragile younger sister from the truth about what this trip is costing them both.

The only thing bounty hunter Joe Stanton wants is to avoid trouble. He’s tagging along on this trip to the Oregon Territory to put a little extra cash in his pocket and take a break from the hunt. The only woman he ever loved broke his heart and his last bounty cost an innocent man his life. Joe’s had enough blood, death and betrayal to last a lifetime. So why, then, does he make Hannah’s secrets his own? Why does he lie to protect her? And why does the stubborn woman’s dogged attempts to help him track down criminals drive him insane with worry?

Maybe because he’s falling for the red-headed beauty. Maybe because if he doesn’t keep her close, they’ll both end up dead.