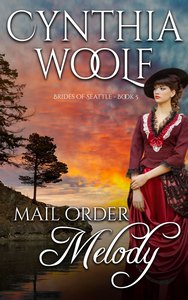 Adam Talbot has his life planned out, and that plan does not include a wife. So why does one woman occupy his mind night and day? He is being trusted to deliver a group of mail-order brides from Massachusetts all the way to the Washington Territory. Karen is one of them. She’s beautiful, smart and has two young children that should scare Adam off faster than an angry rattlesnake.

He was burned at the altar, left standing with his heart broken and the whole world laughing when his fiancee eloped with his best friend. A woman is more trouble than he needs. But he’s the moth and she’s the flame. He knows he’s going to get burned. But allowing her to marry another is out of the question. And when a deranged woman from Karen’s past threatens the soft-hearted woman he can’t help but fall in love with–and her two precious little ones–Adam discovers that walking through fire doesn’t burn anymore, not if it gets him what he really needs…his own family.