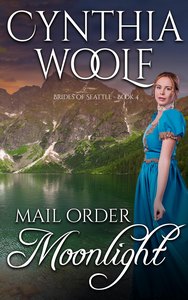 Nicole Wescott had many secrets and became a mail-order bride to escape them. Little did she know she’d run into a monster worse than any she’d faced before.

Michael Talbot had his world shattered when his fiancée married another. Now he’s sworn off women, but the weeping of the woman in the stable had him changing his mind and marrying her the same day he found her.

Michael and Nicole must learn to trust each other even as danger and a killer stalks them. Can trust turn to love?