What better way to celebrate the dog days of summer than with a small-town romance series filled with heat and suspense? Welcome to Pine Point, where secrets abound. I’ve always loved writing about the quirky wonderfulness of small towns, probably because I grew up in one (and I live in one now, too). They’re charming, often picturesque, and filled with characters who know, love, hate, and have all kinds of juicy gossip about each other – some that goes back generations!

People in small towns support each other when push comes to shove, but sometimes they’re oh-so-willing to throw a sworn enemy under the bus too. You can walk down Main Street at midnight and not worry about a thing (yes, the single stoplight has turned from red to blinking yellow, but that won’t matter, because everyone’s in bed anyway). You can buy amazing BBQ chicken from the volunteer firefighters in the summer and ice skate on the church green in the winter. You can make your best friends, your worst enemies, find your soulmate and raise your kids in the house where you (and maybe your parents and grandparents) were raised. Everyone knows pretty much everything about you, but that’s not always a bad thing, isn’t it?

This series was originally published by Samhain Publishing from 2009-2016 but has found a new home with Entangled Publishing and is officially releasing today! In addition to the beautiful new covers, each book has updated content, especially Summer’s Song, which has a whole new beginning: a sneak peek at Summer as a child, a pre-teen, and an angsty adolescent. I loved writing it and can’t wait for readers to see it.

In Summer’s Song, our heroine comes home to Pine Point after 10 long years away. She doesn’t have plans to stay, but that changes once she meets a local hunky handyman. But like almost every main character I seem to create, these two have secrets waiting for them. Each title in the Pine Point series is on sale for only $0.99 through August 27 so you can treat yourself to this entire collection for less than $4.00! Even better, I’ve joined with 7 other Entangled authors to create a Hot August Nights giveaway, and I’ll hope you check out this link for more information about that: http://entangledauthors.myforeverhea.com/

Enjoy this excerpt of Summer’s Song, and enjoy the rest of your summer!

“Hey, you can’t go up there.” A strong hand grabbed her elbow.

Summer turned with a start. “Why not?”

“Not safe yet.” He motioned to the steps, and when she looked closer, she saw a missing riser that gaped like a placid crocodile, ready to snatch up her unsuspecting foot.

“Oh.” She smiled an apology at Mac’s assistant.

He was tall, with light brown hair and deep blue eyes, and his broad, shirtless chest shone with sweat. Muscular biceps, no doubt made strong from summer labor, twitched as he reached for an itch between his shoulder blades. Summer swallowed and tried to chase away a crazy urge to scratch the spot for him.

“I’m Summer Thompson, by the way.” She reached out a hand in greeting. “The—ah—the new owner of this place.”

He studied her with a serious expression. “So I guessed. Damian Knight.”

The one who’s renting the farmhouse. “Listen, I…” She meant to talk to him about that, but she couldn’t quite process the words as his blue eyes locked with hers. He hadn’t yet dropped her hand, which she didn’t mind in the least. Strong. Warm. Sending electricity straight through her.

Mac’s hand on her shoulder broke her reverie. Summer turned and plastered on a smile she hoped looked normal. “Hi, Mac.”

“Shit. Can’t believe you’re here.” He shook his head and grinned, and she glimpsed the chipped front teeth she remembered from high school.

“Well, I wanted to see the house. I just…” She faltered. “I just found out about it.”

“I know. Your father wanted it to be a surprise for you. Sorry about your loss, by the way.” He looked over his shoulder. “He did a great thing, buying this place. Wish he could have seen it finished.”

Mac gestured around the yard. “We’re working on the roof today, obviously. Got another day or so before it’s done. There’s some interior work to do after that. And don’t use these front steps, okay? We still gotta replace a few.”

“Can I see the inside?” she asked. She wanted an idea of the mess she was dealing with. But her doubt grew as she looked around. The needed repairs seemed overwhelming, and those were just the ones she could see.

Damian ran one hand through his hair and sent a cloud of sawdust flying. A grin touched his eyes and, for a brief second, Summer saw her own reflection in his gaze. She looked small and dark, a little girl floating on the blue of his iris. He smiled, and in the sunlight, the blue deepened until she felt like she was falling inside it, floating, forgetting who and where she was. Something jumped in her stomach, and her palms tingled. Knights in Pine Point? There hadn’t been any for as long as she could remember. 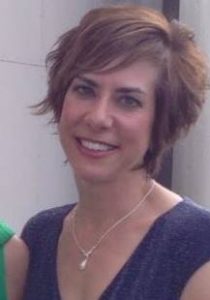 Allie Boniface is the USA Today best-selling author of over a dozen novels, including the Cocktail Cruise, Hometown Heroes, and Pine Point series. Her books are most often set in small towns and feature emotional romance with relatable characters you’ll know and love.

A graduate of the University of Rochester and Case Western Reserve University, Allie is a full-time high school English teacher in the beautiful Hudson Valley of New York. When she isn’t teaching or writing, she and her husband love to travel.

Take some time to browse around Allie’s website, check out new and upcoming releases, and sign up for her newsletter. You can join Allie’s All-Stars too, an exclusive readers’ group on Facebook where fans and friends chat about life, characters and story ideas, and have exclusive access to prizes, giveaways, and early sales!