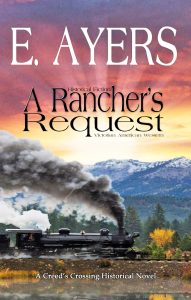 Note from Cindy: I love E’s cover for this book. It’s one of the most beautiful covers I’ve seen in a long time.

It’s always exciting to be here on Cynthia’s blog. It’s especially exciting because my newest western is on pre-order for 99c, and once it releases, Tuesday, June 27, 2017, the price will go up. Okay, 99c is dirt cheap, but why even consider it, if you don’t know who I am? Lots of great reasons!

I love writing historically accurate westerns. I never dreamed the day would come that I would say this, but I really do enjoy digging for information. This one was no exception. Using two local places as hometowns for the hero and heroine meant I had to do some local research.

A Rancher’s Request seesaws between Franklin, Virginia and Creed’s Crossing, Wyoming. So how did such a situation occur? Quite simply, it was not uncommon. In fact, it was rather normal. We love reading about mail order brides going west to meet someone they did not know. They were the exceptions, and now there are more mail-order bride stories then there were mail-order brides. Most of the young women going west to marry actually had some sort of tie to the young men they were about to marry. Frequently, the couple knew each other before he left. Many times the arrangements were made because the parents knew each other or someone knew both young people.

Arranged marriages were extremely common and had been for hundreds of years. The only difference, during Victorian times, was that women could reject the suitor without upsetting the parent who made the arrangement. It also wasn’t unusual for her to go to her father and ask for him to arrange a marriage to a particular man. Arrangements allowed the couple to get to know each other. If he was nearby, he could court his bride-to-be. Long distances usually meant letter writing.

Zadie Larkford wasn’t exactly typical of women her age. She was educated. Her father, as the town’s doctor was a college grad. She graduated from what is now known as Longwood College. (Today it is co-ed, but it has a very long history of being a college for women. It’s a beautiful old school tucked in the rolling hills of Virginia.) But a small town girl with a college education wasn’t exactly marriage material for poor farm boys, or local sawmill workers. She had rejected every suitor and had also failed, according to her father, to find a meaningful job. Zadie was an artist and perfectly content to spend her life painting, while wrapped in the comfort of home.

Duncan was one of Reginald Lorde’s sons. The problem was he didn’t like what his father and older brothers did for a living. He didn’t like being on a boat or even the idea of running a fish packinghouse. He found a job on a nearby farm and discovered he enjoyed it. So when the opportunity came to go west and homestead, he did.

These two young people had fathers who were childhood friends. Life had put some distance between the older men, and the children never got to know each other. When Duncan had settled into his land in Wyoming, he began to realize he needed more than his horse, Rocky, to keep him company. He wrote to his father for a wife. It didn’t take much for that father to turn to his old friend who had a daughter.

When Zadie Larkford discovers what her father has arranged for her, she is furious. She is forced to learn to cook, clean, and do all the chores relegated to the woman of the house. Her mother’s assurances that the Lordes were good people did little to soothe Zadie’s ire.

Maybe the best way to get out of this arranged marriage was to make Duncan Lorde change his mind about wanting a bride.

Enjoy this excerpt from

“If my daughter keeps baking all those delicious things, I’ll have to buy new clothes. I do hope that young man of hers appreciates a good meal.” He took a sip of the tea and then reached in his coat pocket. “Here’s another letter for you.”

Zadie’s breath hitched as she took the envelope. “Excuse, me. I want to return to my painting.”

As she stepped outside, she heard her father say, “You only want to read that letter where no one will see you blush.”

She giggled as she opened the note, then called back to her dad, “He doesn’t write such things.” Well, maybe.

Quickly, she read through the letter and knew she’d reread it several times until she had absorbed everything. This one was serious as he wrote about his life, his family, and living in the west. He had enclosed several tidy sketches of floor plans for a house. She looked at them, and then continued to read.

Since I don’t have a picture of myself to send to you, I figured I could show off my artistic skills and draw my image for you. This is Rocky and I. I hope you know which is which.

Zadie grinned as she looked at his sketch. Oh, Duncan, you look a little long in the face, and I didn’t realize that living in the west would cause your hair to grow so far down your neck. I’ll have to ask him if Rocky has a frown or a mustache. She folded his letter and returned it to the envelope. You are asking for it this time. Just how ugly can I make myself? You’re going to think twice before accepting me as a bride.

4 thoughts on “A Rancher’s Request by E. Ayers”