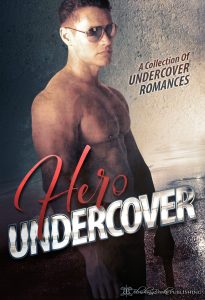 “You have much to answer for, Sherry.”

The ominous tenor of Jared’s voice chilled her to the bone. She’d been hoping—nay, praying—that he would finally see the light where they were concerned, but the angry set to his jaw and stern gaze directed her way as she knelt before his throne made her heart drop into her toes.

Jared reclined on his throne like a lavish Scottish king of old over the club. He was still one of the most stunningly handsome men of her acquaintance in his leather pants and bare, muscular chest. She remembered how it had felt against her skin, and running her hands through the silken threads of his dirty blond hair, tinged with hints of Scottish red. Although tonight was different. Tonight, Patrick Manning and Nick Santos flanked his throne, which was peculiar in itself. And having them there filled her with a startling amount of unease. Sweat slicked her back and the underside of her hair was damp.

Both Doms up on the raised dais with Jared were also fine specimens of manhood, and well built. Quite a few of the subs thought they were just as handsome as Jared. They were beautiful men, but Sherry always felt a little unsettled around them. She didn’t know why. She’d heard through the grapevine that both men were former military and it showed. Patrick was lean in his black jeans and matching tank top that fit him like a second skin. His slate colored eyes gave nothing away. And Nick towered over every male on the island. He was over six and a half feet tall. He was one of the few men of her acquaintance who made her feel small and feminine which, considering she was five foot ten inches tall herself, was rather impressive. Patrick and Nick worked in the pool area but she didn’t understand why Jared had them with him.

“I’m sorry, Sir,” Sherry said to Jared, her knees aching on the glossy black flooring as she knelt before him. She kept her eyes downcast and head bowed out of respect. “I’m not sure I understand what you mean.”

Jared didn’t hold back or decrease his volume as he questioned her and snarled, “From what I understand, you lied to impugn my honor that our relationship was anything other than what it was, scratching an itch between us.”

His words were akin to arrows piercing her heart. Sherry replied, trying to keep the tremor from her voice, “Sir, I thought that there was more. It’s why I came here. I—”

“Regardless of what you believed, I never indicated that I wanted anything more beyond the handful of times we scened in the club. I apologize if I didn’t make that clearer to you. I assumed you understood the nature of it. That does not excuse your behavior on the island. You have been willfully deceitful to other employees about the nature of our relationship to cause harm to myself and others. For that, you will be punished.”

Sherry wanted him to punish her. If he put his hands on her, he was such a randy Dom, surely she could entice him into her bed. She hid her smile, however, otherwise he would make sure she didn’t sit pretty for a week. Although, it might be worth it. She said, “Yes, Sir. I submit to whatever punishment you deem I have earned.”

Jared smiled then. A harsh, unyielding smile, and in all of two seconds, Sherry understood that she wasn’t going to like the punishment he had planned for her. Not. One. Bit. Then Jared commanded, “You will belong to Patrick and Nick for the next week. Perhaps they can teach you the true meaning of submission.”

Sherry’s jaw dropped and then she sputtered, “But Sir, I can’t. I won’t. You can—”

Jared rolled his eyes and gave her an exasperated expression, as though he didn’t want to waste any more of his time with her. He said sternly, “Sherry, enough. Either you submit to Patrick and Nick this next week, or I will have you on the first boat off the island in the morning and you can go back to Scotland. Take your pick.”

SUMMER IS COOLER WHEN YOU STAY UNDERCOVER!

25 New York Times, USA Today, and award-winning bestselling romance authors have created a smoking hot collection of torrid tales starring hunky bad-boy heroes and feisty strong-willed heroines. Heat up your nights with dark fantasies, seductive sci-fi, and breathtaking passion. Our alpha males range from swoon-worthy cowboys and take-charge military men to deliciously decadent dominants, and each page-turning story ends with the happily ever after you crave.

Hours upon hours of breathtaking romance for only .99 cents. Turn up the AC, lie back, and escape into these brand new, red hot, riveting reads. Grab this blistering box set now before the price goes up.

Anya is a bestselling and award-winning author published in multiple fiction genres. She also writes urban fantasy and paranormal romance under the name Maggie Mae Gallagher. A total geek at her core, when she is not writing, she adores attending the latest comic con or spending time with her family. She currently lives in the Midwest with her two furry felines.

Visit her on social media here:

To Master and Defend, Book 2

Submit To Me, Book 7