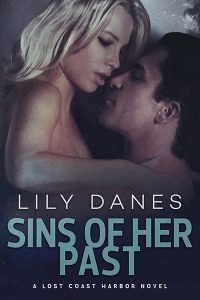 I write sexy contemporary romance. Technically, Lost Coast Harbor is romantic suspense/mystery, but that was an accident. I blame my co-conspirator Eve Kincaid, since she has a knack for crafting great mysteries. Me, I’m more interested in how quickly my characters can kiss. So while I’m having a great time writing the Lost Coast Harbor series, I definitely think of myself more as a contemporary romance author first and foremost.

Lost Coast Harbor is a small town on the rugged Northern California coast, but this isn’t a sweet small-town romance series. Eve and I are both fans of old noir films, and that was a huge influence when we crafted our town. It’s a place full of secrets, and—of course—a lot of gorgeous single men. We created the world together and take turns writing the books. I write the odd-numbered ones while Eve handles the even ones.

A self-made millionaire’s homecoming is complicated when he’s forced to work with his evil ex-wife, the woman who walked away without a word.

Sins of Her Past, Lost Coast Harbor #5, comes out August 30. After that, I’m hopping right into another shared world series with Camp Firefly Falls. It’s set at an adult summer camp, with a new book released every two weeks this summer, each one by a different fabulous author. One Last Fling comes out September 23.

Four words: turn off the internet. I usually put my butt in the chair around 2pm and use Freedom to block access for 1-2 hours at a time. Repeat until I’ve hit the daily word count (between 2000-2500 word a day, five days a week). If I’m being less disciplined, I’ll write in sprints while chatting or checking social media, but I’m a lot less efficient that way.

Zero chance. Characters have always been the easiest part of the writing process for me. They tend to show up fully formed and wonder why I don’t have a plot for them. It’s my favorite part of the process, bringing my imaginary friends to life on the page.

I’m starting my first solo series this month. It’s still early enough in the process that I don’t want to talk about it too much—let’s not scare the ideas off!—but it will be a hot contemporary romance. It should find its way into the world early next year.

Plan? About twelve months out. How well do I stick to that plan…um. Barring any surprises, I’m good for the first six months, which is somewhere between 2-3 books. After that, I usually need to make some adjustments to the plan based on reader response, new opportunities, and my mood. I have a lovely year-long chart that color codes my writing and editing schedule, and the entire thing is written in erasable ink.

I love love love hearing from readers about characters that hit them just right or a relationship that made them do the happy romance sigh. There’s something magical about knowing other people responded the way I hoped they would while writing it.

“Why do you have a movie theater in your office building?” Her voice was steady. Good.

“Because sometimes you need to take a break in the middle of the day and watch Batman.”

She snorted. “You always were a DC fanboy.”

There was a tiny hitch in the conversation, a moment when she knew they remembered the same thing. A drunken debate at two in the morning about the relative merits of DC versus Marvel.

Marcus broke the silence first. “You haven’t seen the error of your ways yet?”

Marcus opened his mouth to protest, then gave up. Smart boy. The DC universe reboot was a gateway to another hours-long debate that she would, without doubt, win.

“I liked the new Batgirl,” she admitted. One should be gracious in victory, even if it was only presumed.

“If she gets her own movie, we can screen it here.” Marcus gestured inside. “You know how it is at tech companies. People work too hard. They get obsessed with a project. You need to let them blow off steam and relax. That goes double in a small town like this.”

Bree nodded, pretending she had any idea what he was talking about. After graduation, she hadn’t been capable of interviewing at a tech company, let alone working at one.

Bree shook her head. “It’s not necessary. Let’s get to work.”

He led her up the wide staircase next to the reception desk. He was two steps above her, giving her a perfect view of the way his thigh muscles bunched and released under the expensive fabric. Her skin prickled in awareness, and she glanced down, focusing on her combat boots as they took one step after another. She should absolutely, under no circumstances, be thinking of Marcus’s thighs.

She made a mental note to not accept jobs when she’d seen her boss naked.

Lily Danes is a native Californian who loves cold weather, snow, and rain. A recovering city girl, she now lives in the Sierra Nevadas, where she gardens, knits, herds cats, and plans DIY projects she’s too lazy to complete. She has few practical skills and would be absolutely useless in the zombie apocalypse.

Learn more and sign up for the newsletter at lilydanes.com.