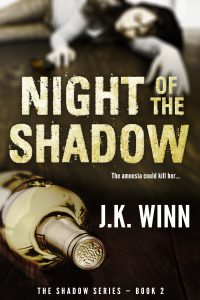 Sights and sounds swelled around her: The backlit bar and throbbing beat of overhead speakers, the loud voices and hot young bodies, the warm, euphoric sensation of alcohol as it flowed down her esophagus and into her veins. All was as it should be.

Friday night, Happy Hour. Her favorite time of the week. Out with friends at Graffiti Bar, 13th and Market, Downtown Philadelphia.

Jessica busily chatted with a stranger on her far side who had taken their friend Jack’s seat at the bar when he wandered off to dance with a blonde. Leaving Ellie out. That would usually bother Ellie, but no matter tonight, she had a full drink, compliments of Jessica’s newest admirer, and the alcohol blunted any irritation. She struck up a conversation with the man on her right, who didn’t appear interested at all, but they rambled on, incoherently at times, about traffic and transportation, taking a circuitous route through a lengthy dialogue.

That was the last thing she would remember about the night. By the time she awoke under her own down comforter the following morning, all she was left with was a throbbing headache, a desert-dry mouth and no memory of what happened later. Had she left the bar with Jessica? Or gone straight home? She racked her brains trying to recall, but nothing came to mind.

So, when she received the call from Jack telling her Jessica had died…she was as shocked as anyone.

“I can’t believe I ordered that margarita.” Ellie said to her new AA sponsor Maddie, across the table from her at the Queen Village Starbucks. Maddie wasn’t much older than Ellie, but she had three years of recovery…an eternity where Ellie was concerned. “I should have known better…who am I fooling…I do know better. I don’t understand how it could have happened.

Instead of looking at her with the disgust she felt for herself, Maddie wore a sympathetic expression. “Relapses are common, especially early in recovery. I wouldn’t beat myself up too much for this one mistake.”

“Maybe, but I feel like I unconsciously sabotaged myself. After all these weeks of sobriety, of laughter and joy, of friendship and camaraderie, I’m back in a deep dark hole of alcoholic despair.”

“There’s something you can do about it.”

“Did you drink today?”

Ellie nodded glumly. “Yeah, I had a couple glasses of chardonnay earlier.”

“And now that I’m drinking again, the flashbacks have returned with a vengeance. I’ve been having these crazy, disjointed memories of the night Jessica was murdered.”

“Murdered? I thought you said the coroner’s office had written the death off as accidental. With her drinking, didn’t they conclude she fell and hit her head?”

“They did, but these recollections are telling me another story.”

“What kind of story?”

“In them, I’m awakened out of a deep sleep by a shockingly loud fight. When I force my eyes open, I spot two people struggling. Although it’s not entirely clear, I strongly suspect one of them is Jessica. If that’s true, then I can confirm something more heinous than an accident happened to her. It’s difficult enough to fathom a mere fall would end Jessica’s life, but the idea someone murdered her, and I might have been a witness, is more than I can handle.”

“All this has to be terribly unsettling.

“To make matters worse, no matter how hard I try to recall the rest of what happened, the memories are as sparse and scattered as leaves on an early autumn lawn. There’s a gaping empty hole where memory should be, which makes me sick to my stomach.”

“You had a blackout, which isn’t uncommon for an alcoholic.”

“That might be true, but it seems as if nothing’s been going my way. My life feels empty. Miserable. Useless. Sometimes I wonder if I want to go on.”

“That’s the alcohol talking. With what you’re telling me, I urge you to stop drinking immediately. The booze will only make you more vulnerable…less able to cope. I promise you, if you stop, I’ll be there for you in anyway I can.”

Ellie gave Maddie a weak smile, not convinced she had the strength or the motivation to put the ‘plug in the jug.’

When Ellie Ross’ best friend dies mysteriously during a wild night spent drinking and partying, Ellie suddenly becomes the center of attention. But not in the way she could have imagined, or ever wanted. The police write off Jessica’s death as an accident, but Ellie’s memories of that fateful night come back to her in flashes, alerting her to the fact Jessica was murdered. The murderer—whoever he is—will stop at nothing to prevent Ellie from exposing the truth.

Now, to protect herself from this faceless menace, Ellie must learn his identity. She hires Psychologist Sarah Abrams to help her recover her memories. Will she identify the killer in time to save herself, or will she become his next victim? Night of the Shadow will keep you on the edge of your seat as Ellie tries to outwit death until the final, surprising twist.

J K Winn has many stories to share. After years of working in the “real” world, including a job teaching college, working with the Indian Health Service, performing evaluations for the New Mexican courts, and even a stint on a hospital dialysis unit, she decided to reinvent herself in mid-life and pursue her love of story. She has three published novels, a play produced by the Actor’s Alliance Festival in San Diego, poetry anthologized in, For the Love of Writing, by the San Diego Writer’s Workshop and a play, Gotcha!, selected for a reading at the Village Arts Theater in Carlsbad, California, May 2012. She presently lives by the beach in San Diego County, California. Visit her at her blog www.jkwinn.com