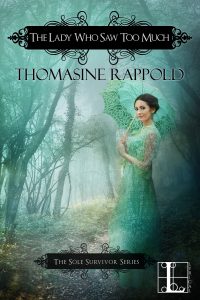 The Sole Survivor series consists of three stand-alone historical romances set in a rural town in upstate New York.  In the wake of surviving separate tragedies, the heroine of each book discovers she’s acquired an extraordinary ability.  Maddie from The Lady Who Lived Again has the ability to heal.  Gia from The Lady Who Saw Too Much has prophetic visions, and Daisy from The Lady Who Drew Me In can transfer people’s thoughts onto paper.  They wrestle with accepting and managing the mysterious talents that wreak havoc on their lives, but it’s the love for the heroes that change them forever.

I’ve just finished The Lady Who Drew Me In, which releases December 20, 2016.

Yes.  I’ve been a member of a wonderful critique group for over ten years now.  There are five of us, each writing in different genres, but we’re a perfect fit.  These amazingly talented women have made such a tremendous difference in my writing life, and I honestly don’t think I’d be published (or sane) without them.

If it was a walk in the park, it was a long, long walk.  While not exactly fraught with peril, my journey to publication took well over ten years.  Like most writers, I kept trudging through the rejections and disappointments until my writing improved enough for someone to take notice. Things moved quickly after that.

Landen Elmsworth’s family means everything to him, and he’s raised his two younger siblings for several years.  He’s an autocratic man, who prides himself of being master of his own fate and taking care of those he loves.  It’s this very strength that makes his physical weakness all the more frustrating to him.  He faints at the sight of blood.

Gia possesses a formidable determination to do whatever she can to protect others, specifically, Landen.  Her greatest weakness is her former addiction to opiates.

Do you have any words of inspiration for aspiring writers?

Absolutely.  It’s simple: Keep writing and don’t give up.  Be patient with the process and take the time to learn your craft.

Do you or have you belonged to a writing organization?  Which one? Have they helped you with your writing? How?

I’ve been a member of RWA for several years.  I’m also a member of the Capital Region Romance Writers.  Membership in both groups has helped my writing in more ways than I can count.  Writing is a solitary profession, and connecting with other writers was like finding my tribe. There’s so much to learn about the craft and business side of writing, and romance writers are generous with their time and their talents.

Did you have several manuscripts finished before you sold? If so, did you send them out yourself?

The first manuscript I sold was the fifth one I’d written.  That fifth manuscript also landed me a wonderful agent.  Until I was agented, I submitted my manuscripts myself.

When someone tells me how much they enjoyed my story.  Bar none. 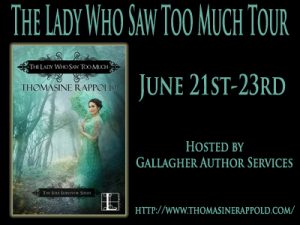 When Gia awoke later that day, the sun was setting. She sat at the window, staring out at the lake. Beneath the pink and orange horizon, water rippled on the breeze. Despite how tired she’d been when she’d fallen into bed, she’d had trouble falling asleep. To her surprise, once she succumbed to her exhaustion, she’d slept soundly for hours. Now that she was awake, all her troubles stirred to life too.

Clara’s recovery reinforced what Gia had always known, but had lately forgotten. Landen was in danger. She felt lost and alone. Afraid.

She started at the sound of Landen’s voice.

“How is she?” Gia asked as he stepped into the room.

“Sound asleep,” he said. “I’ve no doubt she’ll be out until morning.”

Gia nodded. “You must be exhausted as well.”

“On the contrary. I feel wide awake.”

He yanked his shirt from the waist of his trousers. The disheveled result caused a hitch in her throat. The intimacy of seeing him this way, in this room where they’d come so close to consummating their marriage, took her by storm. Had that been only yesterday?

Memories flashed through her mind. The charge of excitement that followed made it feel like a lifetime since he’d carried her naked to the bed. She rose to her feet, though she wasn’t sure why. Her breasts tingled with arousal. The heat flushing her cheeks pooled at her core.

She shook her head, summoning her voice through her lust. “Not at all.”

He stepped toward her, unbuttoning his shirt as he moved. “Did you get enough sleep?”

His blue eyes brimmed with need, not hatred, and she all but melted into a hot puddle at his feet.

She nodded, heart pounding as he moved even closer.

“Good.” He stripped off his shirt. “Now get back into bed.”

Thank you so much for having me here! 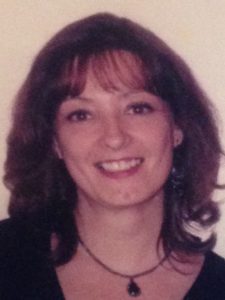 A three-time RWA Golden Heart nominee, Thomasine Rappold writes historical romance and historical romance with paranormal elements. She lives with her husband in a small town in upstate New York that inspired her current series. When she’s not spinning tales of passion and angst, she enjoys spending time with her family, fishing on one of the nearby lakes, and basking on the beach in Cape Cod. Thomasine is a member of Romance Writers of America and the Capital Region Romance Writers. Readers can find her on Facebook https://www.facebook.com/ThomasineRappoldAuthor and follow her on Twitter: @ThomRappold.

Cursed with prophetic visions and desperate to atone for a death she could have prevented, Gianna York swears she will never again ignore the chance to save a life. When she is hired by Landen Elmsworth to serve as companion to his sister, Gia repeatedly sees the image of her employer’s lifeless corpse floating in Misty Lake. As subsequent visions reveal more details, Gia soon realizes her best chance to save this difficult man is by becoming his wife.

At first, Landen Elmsworth believes the fetching Miss York might be right for a meaningless dalliance, but he grossly underestimates her capacity for cunning and soon finds himself bound until death to a woman he may never be able to trust. Yet in the dark of their bedroom they discover an undeniable passion–and a capacity to forge their own destiny . . .

Rafflecopter Giveaway – Ebook The Lady Who Saw Too Much