What genre do you write in and why?

I write a cozy mystery series. In this genre there is no graphic violence, there is a small town setting, and there are interesting characters. I enjoy writing this type of book because you know that your favorite people are not going to get killed, and you’re not suddenly going to stumble into a horrific scene that you wish you hadn’t read. You can sit back, enjoy it, and go visit everyone again in the next book.

Kelly Jackson, executive administrator for Resorts International, flies to Redwood Cove, California, after the manager of a bed and breakfast has a fatal fall off of a seaside cliff. It’s a straightforward assignment until a group of crime-solving senior citizens, the Silver Sentinels, cry murder. Kelly and the Sentinels work together to find out the truth about what happened. This is the basis for Murder at Redwood Cove. In the second book, Murder at the Mansion, a guest is found stabbed and one of the Sentinels, Gertie Plumber, is attacked. Kelly and the Silver Sentinels must solve the crimes before another life is lost.

I’m constantly on the lookout for interesting articles in newspapers and magazines. That’s what lead me to put dogs with special abilities into all of my books. I read about a clinic training dogs to detect cancer. That resulted in Fred, a cancer-sniffing basset hound, in Murder at Redwood Cove. Jack and Jill, two rescued beagles trained to sniff out bedbugs and termites, appear in Murder at the Mansion. Princess, a feisty, bow-legged Chihuahua and retired hearing assistance dog wearing a jeweled collar, will debut in book three.

Yes, I do. I meet on a regular basis with a wonderful group of writers. I feel extremely lucky to have them in my life. They are Colleen Casey, Staci McLaughlin, Ann Parker, Carole Price, and Penny Warner. We share lots of laughs, suggestions, and ideas.

Do you have a view in your writing space?

Yes. I’m very fortunate to have a small wooded valley behind the house. It’s filled with different types of oak trees. I find their beauty calming and inspiring. I work in a loft that has one window filled with the view of a heritage oak. The room has the feeling of a tree house.

What is your favorite dessert?

Anything chocolate. Food with names like chocolate decadence, peanut butter and chocolate swirl ice cream, and double fudge brownies always get my attention.

I’m working on the third book in the series. It is tentatively titled Murder at the Fortune Teller’s Table. Despina Manyotis, better known as “Auntie,” predicts the future by reading patterns in Turkish coffee grounds. Murder occurs and one of the members of the Silver Sentinels is attacked. My protagonist works with them to solve the crimes.

Please tell my readers a little bit about the book that is being released on June 7th. 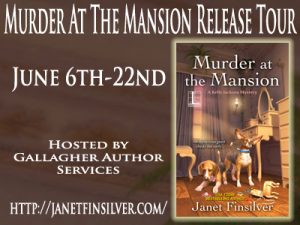 Kelly Jackson is assigned the task of inventorying a historic collection of objects from the 1800s housed at nearby Redwood Heights while the inn she manages, Redwood Cove Bed and Breakfast, is being renovated. She’s also asked to learn what she can about the disappearance of some jewelry from visitors’ rooms.

Shortly after she arrives, Kelly finds a murdered guest in one of the rooms. Then Gertrude “Gertie” Plumber, a member of the Silver Sentinels, is attacked. The police question Gertie’s son, Stevie, who is working at the mansion with his bed bug and termite-sniffing team of beagles, Jack and Jill, about the jewelry thefts as well as the murder. Kelly and the Sentinels work to find who is responsible.

Blurb:  “Murder at the Mansion”

Kelly Jackson returns to California to manage Redwood Cove Bed and Breakfast. While the inn is being renovated, she is assigned the task of inventorying a historic collection of objects from the 1800s housed at nearby Redwood Heights and to assist at the mansion during the Whale Frolic Festival. She’s also asked to learn what she can about the disappearance of some jewelry from visitors’ rooms.

Shortly after she arrives, Kelly finds a guest stabbed in one of the rooms, the door and windows locked from the inside. Then Gertrude “Gertie” Plumber, a member of the Silver Sentinels, a crime-solving group of senior citizens, is attacked. The police question Gertie’s son, Stevie, who is working at the mansion with his bed-bug and termite-sniffing team of beagles, Jack and Jill, about the jewelry thefts as well as the murder. Kelly and the Silver Sentinels must work together to solve the crimes before another life is lost and Stevie is put in prison.

Janet Finsilver is the USA TODAY best-selling author of the Kelly Jackson mystery series. She worked in education for many years as a teacher, a program administrator, and a workshop presenter. Janet majored in English and earned a Master’s Degree in Education. She loves animals and has two dogs—Kylie and Ellie. Janet has ridden western style since she was a child and was a member of the National Ski Patrol. One of the highlights of her life was touching whales in the San Ignacio Lagoon. Murder at Redwood Cove, her debut mystery, was released on October 13, 2015. Her second book, Murder at the Mansion, is scheduled to be available on June 7, 2016.

Murder at the Mansion Book #2:

Rafflecopter Giveaway – ebook copy of Murder at the Mansion

2 thoughts on “A Visit with Janet Finsilver”