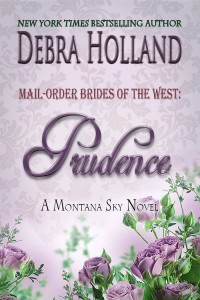 Mail-Order Brides of the West: Prudence is the seventh book in the Mail-Order Brides of the West Series and the story that wasn’t supposed to exist. I originally conceived of this series with Caroline Fyffe, and we each planned to write three books. I wrote Trudy, Lina, and Darcy. Caroline wrote Evie, Heather, and Kathryn. We planned for the stories to go in pairs, starting with Trudy and Evie. My brides would go to Sweetwater Springs, Montana, which is my fictional town in the Montana Sky Series. Caroline’s brides would go to Y Knot, Montana, which is the setting for her McCutcheon Family Series. Each pair of brides were friends who wrote letters to each other.

At the Mail-Order Brides of the West Agency, I’d added two other potential brides who were only intended to be secondary characters. Prudence Crawford was mean to everyone, and no one liked her. Her sole purpose in the books was to provide conflict. After Caroline and I finished Darcy and Kathryn, we thought we were done with the series (although both of us have some of our mail-order bride characters appearing in a few of our other series books.)

But our readers started begging for Prudence’s story. When I finally agreed to write Mail-Order Brides of the West: Prudence, they were so excited. But they also told me to be mean to her. “Push her in the pigpen was one suggestion.” So I did! I couldn’t inflict Prudence on a nice man, so I gave her one who wasn’t so nice and let them fight it out. I think of the book as Taming of the Shrew Goes West.

I also had to figure why Prudence was such a nasty woman, which also played a part in redeeming her character. And since she ended up in Sweetwater Springs, Prudence also had to resolve her conflicts with the three other mail-order brides who lived there. I had a lot of fun writing an unlikable woman who changed and found love.

My Montana Sky Series is sweet historical Western romance, which takes place in the 1880s and 1890s. The series begins with Beneath Montana’s Skies, which is free at all retailers. My very first book was Wild Montana Sky, which is a USA Today Bestselling book. Book Two, Starry Montana Sky was chosen by Amazon in 2013 as a top 50 Greatest Love Story. And Book Three, Stormy Montana Sky is a NY York Times Bestselling book.

Even though the bride books are called The Mail-Order Brides of the West series, my books are also part of the Montana Sky Series. Chronologically, they come between Beneath Montana’s Skies and Wild Montana Sky.

Healing Montana Sky releases in October and is available for preorder. I’m currently writing Mystic Montana Sky for a summer 2016 release. I have a big surprise planned for February. Cynthia is going to be part of it. So stay tuned.

MAIL-ORDER BRIDES OF THE WEST: PRUDENCE

The stench of the pigpens made him take shallow breaths. Michael desperately wanted another drink to drown his sorrows…or, more aptly, his angers. He promised himself that once he found the source of the problem, he’d head to Rigsby’s and let alcohol smooth the edge off his ire. Maybe with a few drinks in him, he could better handle Prudence. Nothing else I’ve tried has worked.

At the sound of his wife’s voice, he stiffened. Speak of the devil. Is there a word for female devil? He couldn’t think of one. He nodded good-bye to Hong and was stepping away when—

“Michael, I want to talk to you!” Her voice rose until the timbre was almost a shriek. She ploughed pell-mell for him, her face red with anger.

Hong ducked into his tent. Out of sight, maybe, but not out of earshot.

The Guans’ should stuff cotton in their ears to block out the worst of Prudence’s screeches.

“I need a drink,” he said, beginning to turn away.

“Oh, dear Lord. Don’t tell me you’re a drunkard like that Obadiah Kettering. Is that another thing you omitted to tell me about your character?”

He swung back, and she was inches away, arms wide. “You omitted telling me I’d be marrying a shrew,” he said. “You should have written the word at the top of your fancy stationary in big block letters.” He sketched the word in the air and stated each letter. “S-H-R-E-W.”

“Why…why I never!” Her mouth opened and closed as if she sought just the right words to hurl at him.

“As for being a drunkard. Up until today, I only occasionally sought refuge in the bottle. But I think being married to you, my dear wife, will make me a frequent patron of Rigsbys Saloon. In fact, I might as well take up residence in the place.”

Stepping forward, she brought up her hand to slap him.

He leaped out of the way.

Prudence missed, and her hand sailed past, making her off balance.

Sure she was going to try again, Michael moved away, putting more space between them.

Prudence slipped on a slimy rock and lost her balance, rotating and stepping sideways only to catch her heel in the hem of her skirt. She teetered backward toward the pigpen. Her legs hit the low fence, catching her at knee-height.

Oh, no! Michael leaped to catch her.

With a horrified expression, Prudence windmilled her arms in an effort to right herself.

Michael missed, grabbing only a fold of her skirt. He yanked back, hoping to pull her upright, but instead, with a ripping sound, the fabric tore.

The momentum toppled Prudence backwards into the pigpen, where she landed on her rump in the mire. “Grrrrrr!” She scooped up two handfuls of mud and flung them at him.

Shocked, Michael didn’t dodge until the last minute, and the stinking mud went splat against his chest and face. 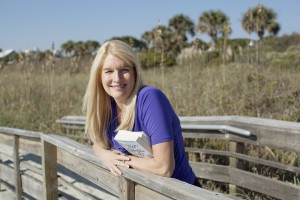 Debra is also the author of The Gods’ Dream Trilogy (fantasy romance) and the nonfiction books, The Essential Guide to Grief and Grieving and Cultivating an Attitude of Gratitude: a Ten-Minute eBook. She’s a contributing author to The Naked Truth About Self-Publishing. Sign up for her newsletter at http://drdebraholland.com

4 thoughts on “Interview with Debra Holland”