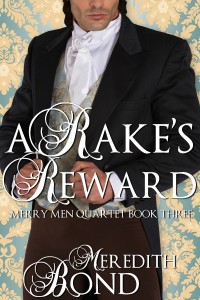 I’m in the process of rewriting an old book—Wooing Miss Whately. I’ve received my rights back to it ten years after it was published by Zebra Books, and it’s the fourth (and last) in my Merry Men Quartet. I’ll be re-publishing soon under the new title A Rake’s Reward.

When I first reread this book my first reaction to it was that I absolutely hated the heroine. She was rude and just plain nasty to the hero. I just couldn’t see why I wrote her like that and why the hero (or anyone else for that matter) would like her. And then I found my notes.

What I had been trying for was an outspoken young woman with a quick temper. Well, I got that. What I didn’t get was anything to make her likeable. Somehow, I just didn’t catch hold of that quality when I wrote her. She is too outspoken—to the point of being rude. And certainly has that quick temper so much so that she snaps at nearly everyone.

Needless to say, I’m completely re-imagining this character so that she’s sweet, if misguided. She tries to be clever and hides what she really wants throughout the story, and, naturally, it backfires on her. The story ends up being (or I hope, will end up being, since I haven’t finished re-writing it yet) a comedy of errors since nearly every major character has a secret they’re keeping.

But what I tried to do so many years ago—and failed in this instance—was to write a character who was different. I wanted her to be strong, feisty and independent. What I got was an annoying, not very nice person. I’m still going for the same qualities I’d wanted to begin with, I’m just now going about it in a different way. But the point is creating characters who are different and interesting.

I’ve tried to do this in all of my Merry Men Quartet books. In the first one, The Merry Marquis, my heroine is shy and quiet. She’s new to English society, having been raised in Spain by her Spanish mother. Her English father has insisted that she go to England to be presented to English society, she just doesn’t quite know how to go on. Only with the help and support of the hero does she manage to shine. But how many books have you read where the heroine is a shy little thing? Not many, and yet, I think this one works (you’ll have to tell me what you think if you read it).

The second book, An Exotic Heir, in the series has the feisty heroine, but even more importantly, the hero is an Anglo-Indian bent on revenge for the prejudice he’s had to face because of his mixed race. How different is that! Half the book takes place in Calcutta during the Raj. And I have to say, this is one of my favorite books which I’ve written.

And finally, the third book in the series, A Dandy in Disguise, is again about a young woman who was raised outside of English society (this time by parents who were archeologists) and needs help fitting in. The hero, again, is someone to love as he is a man hiding in plain site—it just takes the intelligence of the heroine to see what everyone else doesn’t.

I just love “fish out of water” books. Taking that round peg and shoving it into a square hole and trying to make it work. So far, it’s worked for the other three books in the series. Now I’ve got to get it to work in this fourth and last book.

What do you think? Do you like heroines or heroes who don’t fit the mold? Who are different? My imagination, always much too busy, is now taking me to a hero who isn’t of the higher noble classes—a baron or perhaps just a knight. Might I even try for a mere Mr? Would that be interesting? A non-nobleman trying to make it in a society that values you based on your title?

I love to hear what readers think! Leave your comments here, or email me at merry@meredithbond.com. Or come visit me on my Facebook page, www.facebook.com/meredithbondauthor.