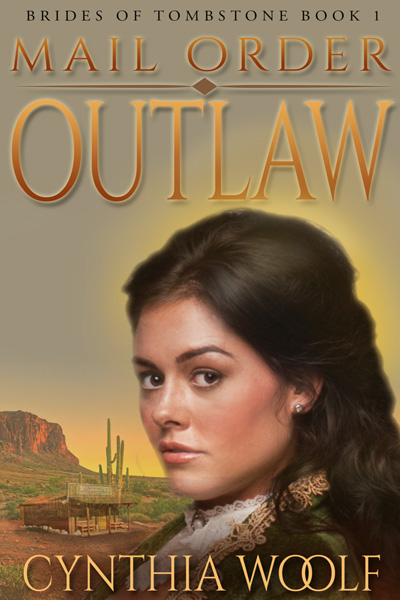 Be sure and leave a comment for a chance to win a $5 Amazon gift card.

Ed Talbot isn’t husband material. He’s an outlaw, was forced into his father’s gang at the age of thirteen, and is wanted Dead or Alive in more than one territory. But now his father is dead, he hates the life, the blood, and his brother’s rages. When a stagecoach robbery goes awry, Ed ends up with a satchel full of charming letters from an enticing young miss. Unfortunately for Miss Lizzie Cobb, her betrothed is now dead, and Ed Talbot sees a way out. Impersonating a fine, upstanding young man shouldn’t be too difficult. Despite the risks, falling in love with her proves to be all too easy.

Isolated on her mother’s ranch just outside of Tombstone, Miss Lizzie Cobb doesn’t have the time or the means to find a respectable husband. As a half Apache woman in the Arizona Territory, being a mail order bride seems like the only solution to her problem until she realizes that San Francisco is too far away, and she’ll have to leave her vulnerable mother and baby brother behind. Her solution? Call off the wedding.

When her groom shows up on her doorstep, she’s shocked. He’s handsome, strong, and has traveled hundreds of miles to claim her. His kisses inflame her body and his presence soothes her soul. Falling for the rugged man is beyond her control. But the past has a way of catching up to outlaws, and facing the truth is going to be hard…for both of them.

I have changed my mind about becoming a mail order bride to Mr. Malcom Brandon. I cannot leave my ranch. It is my first love and if I must remain an unmarried woman in order to keep it, so I shall.

Please extend my apologies to Mr. Brandon. I will refund any fees associated with this change in the arrangement.

She read it over again. Pleased with the document, she prepared it for posting in next mail run.

She still needed a husband, but being half Apache didn’t make it easy to find one. Lizzie couldn’t leave the ranch though, not even for the sake of a husband. For the ranch work she could make do with ranch hands and foremen. It would mean no children for her, ever, but this was the decision she had to make. Keeping the ranch for Jamie was more important than her own dreams.

Ed Talbot adjusted his bandana to cover the lower half of his face. The stagecoach his father had targeted for his latest robbery was about to crest the hill. When it did Ed and his half-brother, Harvey, would be waiting. His father, Josiah Talbot, would fall in behind the vehicle until it came to a halt.

Josiah rode with Harry and Joe, closing in behind.

Ed and his brother waited and the coach was slowing as it was supposed to. Suddenly the shotgun rider started firing his rifle at the men closing in behind.

Ed and Harvey rode toward the coach. Harvey fired his pistol and killed the shotgun rider, but not before they saw Josiah fall. The stage came to a halt and Ed kept his gun on the driver, while Harvey rode past the coach to where their father lay on the ground.

“Nooo.” A howl like Ed had never heard came out of Harvey. Ed knew then that their father was dead, but he didn’t grieve. The man Ed had hated for most of his life was dead. He rejoiced.

Harvey walked forward, reloading his gun as he came. As soon as he got had a full cylinder, he aimed at the driver and shot him dead.

Ed saw what was going to happen and jumped off his horse and ran toward his brother. He grabbed his brother’s arm. “Harvey. What the hell do you think you’re doin’?”

“He killed Pa. He deserved to die. The driver and this man are a witnesses and have to die…” Harvey’s eyebrows came together and he narrowed his eyes. “Or you do and then he dies anyway. Now you got a problem with that?”

That was no choice and Ed was about to say so, when Harvey raised his pistol and fired. The man who’d done nothing but be a passenger on the wrong stage, was dead.

“Couldn’t let you say something you might regret, little brother.” Harvey holstered his gun. “Gather up all the stuff including the luggage and then search all three men,” he instructed Harry and Joe.

Ed noticed a valise in the coach that he assumed belonged to the man. He took it and tied it to his saddle bags.

“Let’s go,” said Harvey. “Take the coach horses, we’ll sell them in town and set the coach on fire.”

Joe gathered up sage brush, so prevalent in this part of the desert near Tucson and piled it inside the coach. Then he took a stick match out of his pocket, struck it against a rock and started the kindling on fire. Within minutes the stagecoach was burning and black smoke billowed into the sky. If they hung around, they’d be found by the sheriff’s posse.

“All right let’s get out of here.” Harvey turned and rode his horse the way they’d come, back to their hideout in the Mule Mountains.

Not having any choice, Ed followed his brother. Harvey would kill him in a heartbeat rather than let him go. Their father had been the same way. Fifteen years ago, when Ed’s mother died, Josiah had taken him into the gang. Ed was thirteen. He learned how to rob stages, trains and banks. He learned how to kill people but he never actually killed anyone. He’d managed to avoid that particular deed. His father and brother thought him a coward, but Ed had no taste for killing a living soul or the outlaw life in general.

When they got to camp, Ed took the valise and went to his bedroll. He opened the piece of luggage. In his search for valuables he shoved aside a couple of suits, ties, shirts, and underdrawers. In the bottom he found a packet of letters tied together with a thin strip of leather. They were addressed to Malcolm Brandon of San Francisco. That must have been the man’s name.

Gripped by curiosity, Ed untied the bundle and opened the first letter. It was from a woman named Elizabeth Cobb in Tombstone.

My name is Elizabeth Cobb, but I go by Lizzie. Thank you for responding to my letter desiring to become a mail order bride to the right man. My only requirement is that the man be over six feet tall as I am nearly six feet myself. I understand from Mrs. Black that you fit the bill by being six feet two inches yourself.

I run a cattle ranch outside of Tombstone in the Arizona territory. Up until two years ago, I ran the ranch with my father. Now it’s just Mama, Jamie and me. Jamie is the actual owner of the ranch but he’s only ten years old and I need to run it until he can take over, if he wants to. He’s a very studious boy and may decide to go to college and study a subject other than ranching. He doesn’t love it like I do.

Mrs. Black informed me that you own a thriving dry goods business in San Francisco. Why are you looking for a mail order bride? Aren’t there any women there for you to marry?

I don’t know what all to say. Please write me back with questions that you may have.

Ed wondered about Lizzie Cobb. Why was she willing to be a mail order bride? Was she ugly? She was very tall for a woman, maybe that was why. What would she do with the ranch when she got married, leave it for her mother to run with the little brother? Was she planning on taking the old lady with her and selling the ranch?

Many questions buzzed through his mind. Tombstone was about seventy miles south, two days hard ride through the desert. Riding hard wasn’t a good idea. He could kill his horse and then he’d be dead himself. There was nothing but sage brush and cactus as far as the eye could see. No water. The going wasn’t easy. There was a swing station where the stagecoach changed horses and passengers could rest and get a meal. Sometimes the stage stayed overnight depending on what time of day they arrived. Apaches roamed the desert and stages, stations, and settlements were often attacked. Bandits were known to come from Mexico and rob the stages as well as gangs like our gang. It was Harvey’s gang now that Josiah was dead.

The stage drivers and those who rode shotgun didn’t want to get caught out after dark if they could help it. Ed understood the reasoning. He’d faced the Apaches himself while living in the desert.

He read more of the letters; there were eight in all. With each letter he became more interested in Lizzie Cobb. She sounded like one hell of a woman. Running a large cattle ranch after her father died. Caring for her mother and younger brother.

From what she’d shared he knew Lizzie was twenty-four years old, six feet tall with dark brown hair and brown eyes. She didn’t sound like a woman who could be missed or mistaken for anyone else.

As he read a plan formed. His only worries were how much Lizzie knew about Malcolm Brandon. The dead man signed his later letters ‘Mal’ so Ed would go by that name. He was only a little taller than the man had been so his clothes would pretty much fit, might be a little tight.

Could he do it? Could he become Mal Brandon?

7 thoughts on “EXCERPT from MAIL ORDER OUTLAW by Cynthia Woolf”