Hi Everyone. Please help me welcome Bonnie McCune to my blog today. Bonnie will be giving away a copy of her book, FALLING LIKE A ROCK, to one lucky reader who leaves a comment, so be sure and leave her one.

Why, in this day of reality television, larger-than-life news, easily accessed games, and constant communication between people, why would anyone read fiction? And should you feel guilty about indulging?

I believe it was Stephen King who quoted his mother when she described reading as “a short, sweet vacation.” That captures the pluses—relaxation, escape from the everyday, stimulation, and intellectual challenge. We’re so very busy nowadays, usually doing not much, nothing equals reading for a complete change. As for fiction, I’ve always thought it was truer to life and contained many more insights than nonfiction—whether biographies, self-help, philosophy, or politics. So no guilt about indulging when we benefit so much from fiction.

Why do your heroines face so many challenges in addition to the usual rocky road to romance?

In my first published novel, the heroine faces a major crisis—a malfunctioning hot water heater that floods her apartment and threatens explosion. In the second, the heroine and her family are caught in an extreme winter blizzard with no heat or lights. In the current one, a massive wildfire threatens not only the heroine but also the entire forest. In my work in progress, a flash flood covers the mountains.

I’m a fraidy-cat. Anything and everything scares me. Example: in the middle of the night yesterday, I woke when the furnace turned on. A strange new noise accompanied the forced air. I immediately thought the equipment was going to explode.

We write what concerns us. For me, that’s human relationships, focusing on the positive, and also addressing fears. I’m not courageous, and nearly everything makes my heart beat overtime. To tackle those concerns, my heroines also are chickens but learn to overcome their fears by thinking and taking action. If there’s an external challenge, like a wildfire, these simply personify the anxieties she hides deep within. As a writing technique, situations that threaten a character physically also enable her to strut her stuff in front of other characters and readers.

Where are the heaving bosoms and throbbing loins in your books? Why don’t your characters have sex?

Oh, they have sex, believe me, or, more apt, they make love. They just don’t do it on-stage. Any psychologist—or writer—will tell you human emotion is the key factor in sex. Without it, the act is mechanical, not much different from eating or defecating.  And if a writer’s going to have good sex scenes, he’ll emphasize emotions. So that’s what I emphasize in my writing. Being the old-fashioned person I am, I also prefer not to risk offending readers. I take enough chances with that in the realm of social activism.

What’s your background and how did you arrive here?

I’ve been writing since age ten, when I submitted a poem about rain rushing down the gutter to the Saturday Evening Post (it was immediately rejected). This interest facilitated my career in nonprofits doing public and community relations and marketing.  I’ve worked for libraries, directed a small arts organization and managed Denver’s beautification program.  Simultaneously, I’ve been a free lance writer with publications in local, regional, and specialty publications for news and features. For years, when my children were little and I was cooking family dinners, we had no money, so I entered recipe contests in the hope of winning.  Once I was a finalist once to the Pillsbury Cook Off.  A current special love is live theater.  Had I been nine inches taller and thirty pounds lighter, I might have been an actress.   For reasons unknown (an unacknowledged optimism?), I believe that one person can make a difference in this world.  This explains my involvement with groups like community organizations, political campaigns, writers’ and arts’ groups, and children’s literacy.  It probably accounts for my writing romances, in which endings are always happily ever after.

What do you look for in the novels you read?

I like to get into other people’s heads.  I think if we could feel what others do, we’d be a lot kinder to one another, as well as more pleasant.  For me, fiction writing is the closest we can get to this perspective.  One of the best books I’ve read recently is The Absolutely True Diary of a Part-Time Indian by Sherman Alexie.  Told from the point of view of a fourteen-year-old Native American boy, it’s hysterically funny while simultaneously dealing with tragedy such as alcoholism, death, and racism.  I’ll never be fourteen, a male, or a Native American, but Alexie is so skillful a writer that I became young Arnold for the duration of the book.  Needless to say, the quality of the writing helps immensely.  That includes good grammar!

What work is in progress for you?

Never Retreat s protagonist, Ramona Soto, a struggling single mom, faced harsh reality 18 years ago when she got knocked up by a roving con man only to discover after several other relationships, men aren’t the answer. During the same time, a series of low-paying, dead-end jobs convinced her to get a decent education.

Now at thirty-something she’s concentrating on her career as a paralegal in a major telecommunications firm in Denver, but with son Andy preparing for college and a string of bad-luck incidents like the breakdown of her car, she longs to break the glass ceiling and leapfrog to a management position.  The company retreat provides the opportunity. Top executives plan to award bonuses and promotions based on the skills shown by key employees. Raye’s one of the select, and with her motivation and intelligence is sure to succeed. She hopes.

Enter Desmond (Des) Emmett. Newly transferred from another base of operations to handle the security department, the ex-serviceman fills every negative qualification Raye carries around on a mental list for the guy to avoid. A motorcycle enthusiast, sweet talker, fast mover, apparent sexist, he’s matched with Raye as teammates at the isolated retreat location. Initial conflict and antagonism turn to hidden attraction, when  they collide with an insurmountable obstacle. Only one of them can achieve the top honor.

Mother Nature intervenes with the perfect summer mountain storm accompanied by a massive flash flood. Cut off from help, their very existence endangered, they and their co-workers confront a wall of water sweeping down the rocky canyon. Raye and Des must put aside their differences to rescue not only their colleagues, some of whom are injured in the fray, but also their future as a couple.

I also am working on a satire about government and government employees entitled Civil Servants.  Not a romance although at least one occurs in the course of the book.

When you’re ‘falling like a rock,’ you’ll risk anything.

Unloved and unemployed. That’s Elaine Svoboda, after she’s sacked, then flees across country to her boyfriend who drops her flat. Teetering on the abyss of disaster, she calls an old friend who invites her to a tiny mountain town with fresh prospects. There she meets rugged, hunky Joe Richter-Leon, mayor of Falling Rock.

Maybe he can help her find a job. Maybe they can become friends, even share romance. Sparks fly immediately, but major obstacles make a new life on the ashes of the old appear impossible. Joe’s consumed with challenges like the dismal local economy and an impetuous sister. Elaine butts heads with him at every turn in the rocky road. Are her bungling attempts to help the problem? Or does she remind him of a greedy, selfish ex-wife?

Before they can build a new life on the ashes of the old, she must overcome a few obstacles like a broken ankle, an eating disturbance, his stubbornness, and her own fears. She’s smothering her hopes when a battle with a forest inferno illuminates their true feelings and desire.

Funny and frank, poignant and perceptive, when two people are “Falling Like a Rock,” they learn surrender sometimes means victory.

The movement now wasn’t rocking but more like a grind. A slowness. A shiver. She knew she had to leave the main road and find help. She swerved onto a pull-off that appeared as if by a miracle, turned off the motor, and sank into the seat. In all directions she saw flat monotone prairie. If spring was about to arrive, no sign of it blossomed here. An occasional bush of greenish sagebrush nodded, but most of the landscape consisted of earth-toned dirt and dirt-toned pebbles scoured by a constant wind, which threw a thin top layer of particles hither and yon.

What she knew about auto mechanics fit on a matchbook cover. She’d been shown where to fill up on gas and wiper fluid, and that was the extent of it. She flicked the ignition off and on several times, peered at the dashboard, even popped the hood. Nothing looked out of place or broken.

She returned to the driver’s seat to think and worry her tooth with her tongue. It wasn’t safe to sit out here alone, and dismal warnings from her parents to never trust a casual passerby in a situation like this darted in her mind. So she hauled out her cell phone. No service. She slumped in her seat.

The plains spread horizon to horizon around her, and an appreciation rose in her for the courage and hard work of the pioneers who had traveled one slow step at a time over an endless landscape to reach their new homes. At least nowadays an asphalt ribbon transversed the plateau. On the road an occasional semi whooshed past, rattling her vehicle as it traveled. One trucker slowed to a crawl and honked, but by the time she decided he was offering help, he’d disappeared.

She twisted her brain in knots to find some way to save herself. Surely if she were careful, stayed in her car and blinked her lights and beeped, someone should rescue her. Perhaps she should wait until a woman stopped, but another female would be as afraid to pull over as she to chance an encounter.

Clouds began to build in gray billows, flowed from west en route the east, and the sun plunged toward twilight. If anything terrified her more than an appeal to a stranger for assistance, it was spending the night out here in the open. In her rearview mirror, a battered Land Rover appeared, and almost on impulse, Elaine switched on her hazard lights and leaned on the horn.

The vehicle slowed but didn’t stop. Not until it was some yards down the road. Next a tall, lean figure climbed out, the engine still in operation. A man dressed in jeans, ski jacket, and a black Stetson. Elaine would have laughed if she hadn’t been worried about the security of the car door locks. She was in the West now. It made sense for a cowboy to show up.

He approached with careful deliberation, halting a few feet from her, and she rolled her window down several inches and studied him in case she had to describe him later to the authorities. Not particularly suave or polished, but certainly with the rugged strength typically associated with cowboy types. Dark, as if he spent time outside or had some Mediterranean or Latino ancestors. A prominent nose, off-centered, perhaps from being bashed once too often. 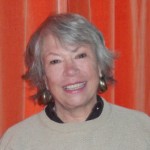 19 thoughts on “An Interview with Bonnie McCune”