I’d like to introduce myself. My name is Merlin—yes, the Merlin of Arthurian legend. In Rolf’s Quest, Aubrey Wynne’s first historical fantasy, you won’t find me at my height of popularity. I am trapped in a Hawthorne tree and getting desperate. You see the tree Vivien encased me in is dying. And when it does, I die. Hence, my distress.

My egotistical, self-seeking descendants have done little to aid my predicament. They either used magic to trick the woman (and by the gods, I know that doesn’t work) or did not see love staring them in the face until it was too late.

When I was down to one live branch, I decided to take matters into my own hands, er limbs. I told the latest failure I would take his first born under my own tutelage. His father ranted and then gave up, of course. God’s Blood, I raised a King. I can certainly educate a baron’s son.

Rolf was an excellent student. He grew to respect me and I feel there is a strong affection between the two of us. He is a natural sorcerer though and his shape-shifting abilities are tremendous. He is a champion on the battlefield and is favored by the King Henry II and Eleanor of Aquitaine.

But it ends with this boy. He has found the woman that is the key to our future.  This is the last opportunity to end this curse. If he is not successful, I perish. Our future generations will never have the chance to find happiness. Rolf will take the defeat badly.

Wish us luck. I hope the next time we speak, you are able to shake my hand. And then the search for Vivien begins…

Baron Rolf Arbrec, the royal wizard for King Henry II and Eleanor of Aquitaine, is burdened with a centuries-old quest to break the spell cast on his descendant, Merlin. To lift the enchantment, he must find true love without the use of magic or deceit, something that has eluded the men generations before him.

Finding genuine love is no easy task, even for a wizard, and time is running out not only to complete his Quest, but to give future generations a chance at happiness. When Melissa steps from his dreams and into his arms, he realizes his need for her love runs deeper than just a way to free Merlin.

Lady Melissa Garrick travels to London to meet her betrothed. Along the way, she encounters a man who haunts her dreams and makes her reconsider her destiny. Torn between loyalty to her family and her intense attraction to Rolf, she struggles to remain an obedient daughter. Though she desires him, will she defy her family and turn her back on her betrothed? Or will time run out and Rolf be doomed to a life of discontent and bitterness like his ancestors before him? 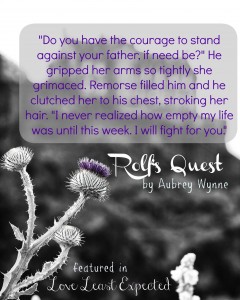 The surrounding mist climbed Melissa’s boots and swirled in and around her legs like an affectionate cat.  Gentle but firm, it pushed her inside the magical forest. The stillness of the place struck her. The kind of hush that fell over a room when something significant was about to happen. Her heart raced in anticipation. In front of her towered a massive Hawthorne tree with charred branches that seemed to welcome her. Between the gnarled limbs was a large blackened hole that filled the center of the trunk.

“I have been waiting for you.” She jumped at the sound of an old man’s voice. She screamed as a face appeared in the tree. “I do not mean to frighten you, child. I admire your courage. It’s a quality essential to your future.”

“Why am I here?” Melissa asked.

“To meet your Fate,” answered the raspy voice.  The distant sound of hoof beats distracted the ghost-like image. “And he has arrived.”

Melissa turned toward the forest opening in confusion.  “The mist . . .”

“Yes, it conceals our home from trespassers on the outside but does not impede our view from within.” The elderly man chuckled. “Rolf did not exaggerate your beauty.”

The pounding of hooves grew nearer.

Horse and rider burst through the tree line. The great beast halted before her, and the stranger dismounted. In one fluid motion, he wrapped a powerful arm around her waist and pulled her hard against his chest.

He spoke only one word. “Melissa.”

The blood pumping through her veins throbbed in her ears.  “Rolf?” she whispered, clinging to him, afraid to raise her eyes.

His fingers lightly stroked her cheek and sent a shudder through her body. He lifted her chin, bent his head, and then paused.  Uncertain, she looked up, her mouth half-open in a silent question. The intensity and passion in his eyes told her he now claimed her as his own. Their breath mingled for a moment before his lips brushed hers. Then she threw back her head, surrendered to the sheer pleasure of his kiss, and her world shattered.

The soft touch of his mouth sent a shiver through her that made her knees buckle. His chest was hard beneath her palms. He buried his fingers in her hair and forced her head back, demanding more. She clutched at his tunic to hold herself up.

“I must have you.” His teeth nipped her earlobe; the whispered words tickled and teased her neck. One hand roamed the length of her back, sending waves of heat through the core of her body. His manhood pushed against her skirt. She struggled against this desire; her betrothed waited beyond the trees. Her mind told her to run, yet her heart begged to remain. She stopped resisting, leaned into him and gave way to pure passion.

Her mouth opened to return the kiss, only to feel him slip away. Her eyes flew open, and his image wavered then faded into the darkness. “Come back to me. Do not leave me like this.”

Melissa awoke, tears wet upon her cheeks. Emptiness burned in her stomach. She wrapped her arms around herself and curled into a tight ball to shield her body from the pain. She should not have hesitated. 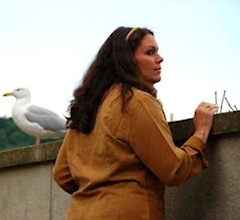 Aubrey Wynne’s first love is historical romance. Her current story, Rolf’s Quest, is set in the chivalrous 12th century court of Henry II and Eleanor of Aquitane. Though she is an avid reader of historical fiction, her own works usually involve some level of fantasy.

Aubrey resides in the Midwest with her husband, dogs, horses, mule and barn cats. She is an elementary teacher by trade, champion of children and animals by conscience, and author by night. Obsessions include history, travel, trail riding and all things Christmas. She is a proud member of the Coffee Talk Writers. Her debut story, Merry Christmas, Henry, was published in November 2013 by Melange Books, LLC and received Best Short Romance in the Editors and Predators Reader’s Choice of 2013. Her humorous shorts, Pete’s Mighty Purty Privies (Goodreads Top 100 Laugh Out Loud List) and To Cast A Cliché are published with AlfieFiction.com Rolf’s Quest, a historical fantasy, will be published in the anthology Love Least Expected February 2015.

Hook up with Aubrey

When love drops in unexpected, the strangest things can happen. Nine short stories of romance, magic and love from award winning and USA Today recommended authors.

5 thoughts on “A Word From Merlin by Aubrey Wynne”