When Jess packed up her belongings and fled her small hometown in Kansas, she never looked back. Free from her family’s dark past she was finally able to pursue her lifelong dream as a professional dancer. She never expected to find herself at his door…or at his club.

Nikolas was unlike any other man she had ever met. Sexy…Alluring…Predatory. Dangerous. The kind of man with more secrets than even she had. Every instinct warned Jess against knowing him further, but she always did like playing with fire…

Nikolas Roman took one look at Jess and knew she was trouble from the very start. But something about the defiant twist of her mouth and the wide, haunted eyes of a damaged soul touched him in places he had long ago thought dead. He knew he needed to stay far away from her for his own sanity, but like a moth to a flame he was helpless to resist…

Working at Takers gentleman’s club was the last place Jess thought she would find herself, but she quickly learned how the game was played. See what you want, take what you can get…but at what cost?

Excerpt:
This man was seriously bad news. One she knew she needed to stay away from. She was fully aware of his reputation from Allison. Not only with the ladies, but of being a notorious Mafioso. She also knew he was very much married, an arranged marriage at that, but supposedly there was some story there and she was never discussed. Ever.

Nick swung his leg over a chair and sat down. “Okay, let’s see what you got. Get on the stage and I’ll clue Mikey when you’re ready. Oh and Manhattan…how do you feel about going topless?”
Jess hesitated for a moment before she climbed on the stage.

This was the end of the line for her. She was desperate now. If she didn’t make this work, it was back to Kansas for her. Back to her old life, back to her family…back to her father…back to his world.

Becoming the failure he always said she would be. Not this time.

He would never get the opportunity to touch her again.

She shivered. She was never going back to them. Or him. She was done with that portion of her life. Not even if said life, depended on it.

Which, in a way, it kind of did. For her piece own piece of mind, for her sanity, to escape the dark recesses of her mind and find some semblance of happiness, she needed this. Just once, it would be nice to get a decent night’s sleep.

No nightmares. No terror filled panic attacks, wondering if tonight was the night her father emptied his gun in her head. No dreaded anticipation of what was to come.

“Kid?” Nick’s voice jolted her out of her thoughts and she looked up sharply and met his gaze. It was too soon to mask the naked fear and haunted, gnawing ache in her eyes. She knew he could see it all.

What surprised her was his curiously knowing silence. As if he knew exactly what she was thinking and feeling, and could relate. He was giving her an out.

One that she was not going to take. Jess shook herself.

“I guess I’m ok with it. But will you, I mean will they be able to touch my boobs?” If he caught the slip, he didn’t let on. “And why did you ask me where I was from, if you already knew?” She was annoyed at both him and herself for the slip and for the way he made her feel.

There was an awkward pause before Nick finally spoke. “I ask because I can. It’s my club. You got a problem, there’s the door.” Nick arched his brow at her.

She nodded and glanced away. Ass.

He continued. “Now then. No touching by others period. However, there are no rules for me. You’ll never have to do anything you aren’t good with. I promise.”

Why the ***k did he promise that? Jess wasn’t about to ask.

“Mikey, Hot Child in City. When you’re ready, kid.” He leaned forwarded and put a cigar in his mouth.

As the music started playing, Jess wasn’t really sure what to do at first. How the hell am I going to do this? She closed her eyes and started swaying to the music. When she opened them she looked directly at him and something took over her. She found herself dancing for him, seducing him with each hip grind and twirl around the pole.

She noticed the more she danced the harder he breathed. He was actually getting a rather large hard on and didn’t seem to care if she knew. He was feeding her, and she got lost in his eyes and forgetting they were in a club. His club.

He was intrigued with her from the moment he saw her. Her blond hair was shining in the lights. He could see through the white tank top she wore as it stretched over her exquisite breasts. Her stomach was flat, even her belly button looked inviting to him. Her long legs were gorgeous, and those tight black shorts she wore outlined every curve of her shapely ass.

He swallowed hard. How was it she could be so fucking hot yet be so angelic and innocent? What was she, all of nineteen? And what was it about this girl he felt he needed to protect? What was he hiding behind those eyes that hid a lifetime of pain, and were much wiser than her years? He didn’t know much about her but planned on finding out. That was for f*****g sure.

He heard the music stop.

“Not half bad. The club is open from seven till three. The slot is two nights a week. I don’t pay my girls but you’ll be well taken care of. Tips are yours, except for the ten percent I take off the top for allowing you to dance on my stage.”

“Your stage name is Manhattan. Remember it.”

He got up from the chair and started walking toward the back. He turned and looked at her standing on the stage. 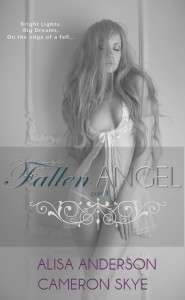 Alisa Anderson
well…alisa did stuff and is still doing stuff. only now she has two boys crazy enuff to want her as their mommy. hey, at least she tried to warn them, so her job is done. she doesn’t like to capitalize, partially because she likes how lower case letters look visually, but mostly out of laziness. please don’t judge. it could be you. and she would say, hey. you’re alright, buddy. you’re ok in my book. now c’mere for a hug. the hug might be pushing it. air kiss? you are strangers, after all, with only a mutual love of poor grammar.

she lives for a world full of controllable anatomically correct, android men programmed to meet her specific feminine needs (wink, wink, nudge, nudge with a big waggle of the eyebrows). who look like the rock. and ian somerhalder. and idris elba. and that’s it she promises. variety. gotta have variety, right?

but alas…apparently that exists only in johanna lindsey’s genius mind. so until then, she enjoys her incredibly warped sense of humor. she reads tons of erotica and romantic, drippy goo that makes her heart go pitter patter. then she thought, hey. what, she said to herself. (softly, of course, so no one finds out she is indeed, 2 nuts short of a fruitcake) maybe you should write this stuff too. maybe someone will like it and maybe buy it. so she said, huh, you think? then she said, well…yeah, i wouldn’t have suggested it…(inserts sarcastic tone) and then she was like lose the attitude, ok? then she was all, would you just shut up and write, already? sheesh! and she did. 🙂

When Cameron is not in the lab working toward a Ph.D., in Neuropsychopharmacology, which in laymen’s terms is basically finding the effects drugs have on mood and behavior, she is writing stories, crating vivid, intense characters you will never forget.

She believes while life can take you down every path but the right one, eventually everyone will find their happily ever after.

Does your mother know what you’re reading?