Please help me welcome Veronica Scott to my blog. She’s got a great blog for you. Read on. 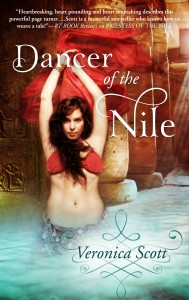 I’m always so pleased to be Cindy’s guest! Thank you for having me visit today. I thought I’d talk a bit about the ups and downs of life in ancient Egypt, as told in letters written primarily on bits of pottery. (Since I love all things ancient Egyptian, and write a paranormal romance series set there.)

Surprisingly the Egyptians wrote many private letters, almost always beginning with a salutation that included “Life, prosperity, health”. We tend to think of them using only papyrus scrolls, writing in elaborate hieroglyphics but in truth many everyday letters and notes were written on flakes of pottery known as ostraca, in hieratic, which was a cursive version of the symbols. Large quantities of these ostraca have been found at Deir el-Medina, a town where the artists, sculptors and others who created the royal tombs in the Valley of Kings lived. The village was occupied for hundreds of years and in some cases archaeologists have found letters from succeeding generations of the same family.

Letters from Ancient Egypt by Edward Wente is one of my favorite research books and all the snippets in this post below are drawn from that book. (Scholar’s Press, Atlanta, GA, 1990). He’s credited with doing all the translations. I’m omitting all the flowery and lengthy standard greetings and closings.

Here’s one that must have quite a story behind it:
“I have written to you. It is none of my wife’s business.”

And a woman wrote her sister a long story that starts with this:
“I will divorce you (my husband) keeps saying when he quarrels with me on account of my mother questioning the amount of barley needed for bread…” Mother-in-law problems of 3000 years ago!

I like this one:
“What is the meaning of your dealing with me like a magpie among the doves?”

Or an admonishing note that a housewife Nebemnu received from her sister:
“Please give your personal attention and weave for me that shawl very promptly…because I am really naked…make one for my backside.” Nothing to wear to the big festival she mentions in another part of the letter apparently….

Many of the letters are requests or deal with trade – send me a goat, bring me a bird, did you get the sixty cakes, buy me an ox, send me a duck as well, we only received 30 fish….if there is to be no ox, return the bed and the coffin I gave you…

It’s touching how often the letters inquire after the health of the other person. A fairly standard paragraph in many missives gives reassurance to the effect that we’re fine today but no one can say how we’ll be tomorrow. “I’m alive today but I don’t know about my condition hereafter,” says one scribe/priest to his superior.

There were a number of letters about crimes, investigations and punishments , mostly involving theft or suspected theft. One of Pharaoh’s generals wrote: “…have these two policemen brought to my house and get to the bottom of their charges in short order and kill them and throw them into the water by night but don’t let anybody in this land find out about them” O_o, sounds like some seriously bad things were happening but as all we have are bits and pieces of letters, we’ll never know how it turned out. The same general ordered a substantial quantity of silver or gold sent to him without delay, via barge. Even more interesting, the letter about killing the policemen was sent to a woman…

Some of the most touching were letters written to the spirits of the deceased, who had gone to the Afterlife. Here’s one from a widower to his late wife: “How are you? Is the West taking care of you…? Now as I am your beloved on earth, fight on my behalf…please become a spirit for me (before) my eyes so that I may see you in a dream…”

I love writing about this era in Egypt’s past, although I put something of a paranormal spin on the events and have the gods and goddesses becoming directly involved with my characters. My most recent Best Selling novel, Dancer of the Nile, involved the snake goddess Renenutet and Horus the Falcon. Here’s the story:
Egypt, 1500 BCE
Nima’s beauty and skill as a dancer leads an infatuated enemy to kidnap her after destroying an Egyptian border town. However, she’s not the only hostage in the enemy camp: Kamin, an Egyptian soldier on a secret mission for Pharaoh, has been taken as well. Working together to escape, the two of them embark on a desperate quest across the desert to carry word of the enemy’s invasion plans to Pharaoh’s people.

As they flee for their lives, these two strangers thrown together by misfortune have to trust in each other to survive. Nima suspects Kamin is more than the simple soldier he seems, but she finds it hard to resist the effect he has on her heart. Kamin has a duty to his Pharaoh to see his mission completed, but this clever and courageous dancer is claiming more of his loyalty and love by the moment. Kamin starts to worry, if it comes to a choice between saving Egypt or saving Nima’s life…what will he do?

Aided by the Egyptian god Horus and the Snake Goddess Renenutet, beset by the enemy’s black magic, can Nima and Kamin evade the enemy and reach the safety of the Nile in time to foil the planned attack?

Can there ever be a happy future together for the humble dancer and the brave Egyptian soldier who is so much more than he seems?

3 thoughts on “Ancient Egyptian Life in Letters by Veronica Scott”