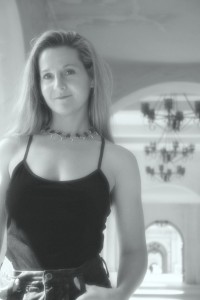 Chris Marie Green is the author of Only the Good Die Young, the first book in the Jensen Murphy, Ghost for Hire series from Penguin/Roc, which features a fun-loving spirit from the ’80s. She also wrote the urban fantasy Vampire Babylon series from Ace Books as well as The She Code, a “geek lit”/chick lit/new adult hybrid with comic book art work by Billy Martinez of Neko Press Comics.

If you could live anywhere in the world where would it be, and why?

It’s a toss up! There are two places I’ve visited that immediately felt comfortable to me: New Orleans and London. New Orleans appeals to my urban fantasy/dark mystery side with all its ghost stories and its colorful history of tragedy and survival. But London has the Tube, the Roman ruins in the middle of busy city streets, and high tea! (I live for a good high tea even more than I do a Sazerac.

Yes—besides the basic high school waitressing gig, I’ve been a ticketseller/visitor assistance officer/switchboard operator/jack of all administrative trades at what used to be the San Diego Wild Animal Park (now it’s called the San Diego Zoo Safari Park). I’ve been a personnel assistant at a temporary service, as well as an administrative temporary worker. Before I went into writing full time, though, I was an eighth grade teacher of humanities. I was seriously pursuing a writing career during my five years of teaching, and I told myself that if I ever sold three books in a year, I would quit so I could have time to write a lot more. When I sold four books in a row to Harlequin, I had to keep that promise to myself. 

I write in a few! My newest release, Only the Good Die Young, is a “Chris Marie Green” urban fantasy. Under that name, I also wrote the Vampire Babylon UF series, but I also have a few new adult/chick lit works (The She Code, what I like to call a “geek lit” hybrid. 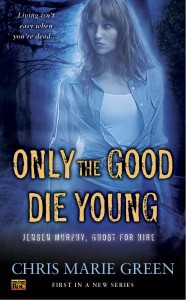 Tell us about your current series/WIP.
Only the Good Die Young (book one in the Jensen Murphy, Ghost for Hire series) is about a ghost who has been caught in a time loop where she’s been experiencing her death again and again. Unfortunately, since Jensen was murdered, her death was violent, and she has blocked out the identity of the maniac who ended her life. Enter Amanda Lee Minter, a psychic/medium who pulls her out of this time loop for a good purpose—to help solve a modern killing. In fact, Amanda Lee hopes that Jensen will be able to haunt a confession out of the man who may or may not be guilty, and then they can start solving Jensen’s crime…

I had such fun (and creeped out moments!) writing this because Jensen died in the 1980s, so she’s a fish out of water. Also, the ‘80s are just crazy, LOL. I also have a love for slasher movies from that era, and the book has some of that vibe going for it. But the story is also fun because of “Boo World,” the ghost dimension, and the other spirits inhabiting it. My hope is that the tone resembles the early days of Supernatural, which struck a great balance between darkness and humor.

Yes, thank goodness! Judy Duarte and Sheri Whitefeather and two of my dearest friends as well as amazing writing partners. We’ve supported and helped each other for about fourteen years now. What’s funny is that we are also able to “get” each other’s writing, no matter what we’re working on. Sheri and I write in a lot of the same genres, but Judy loves doing inspirational—you’d think that’d be a problem when she’s reading my monster stuff, LOL. But we’re like old married people, comfortable enough with each other to always be honest. Besides, a story is a story.

Jensen Murphy is incredibly loyal, which can either be a good thing because her friends are the same way with her, or a bad thing, because sometimes loyalty has blind spots. There are a lot of dark places in Boo World where you shouldn’t be loyal to others, like Elfin Forest, where Jensen was murdered. There are some pretty sketchy spirits there, so she’s going to need to put up her guard a little more…

I love just about everything! You can see that when I name off my favorite books: The Secret History by Donna Tartt (literary murder), The Promise of Jenny Jones by Maggie Osborne (historical romance western), and The Stand by Stephen King (apocalyptic horror). Again, there’s my balance of dark and light! Tellingly, there’s a little more darkness in this list, though.

The second Ghost for Hire book, Another One Bites the Dust, will be out in November. The third has yet to be named and scheduled, although I have my fingers crossed that they keep the title I suggested, LOL. (All the books have titles of songs that Jensen might’ve listened to back when she was alive.) Starting in July, I have a new Crystal Green romance series with Berkley Intermix’s digital first line. It’s called Rough & Tumble and revolves around a tough bar on the outskirts of Vegas and the hot men who hang out there.

What are you reading now?

This is hilarious, but I finally started Fifty Shades of Grey. A little behind on my reading, I’d say. I’m also listening to an audiobook about Jacques Pepin called The Apprentice, just because I adore reading about cooking. I can’t say I’m awesome in the kitchen, but I like to fantasize! Also, I’m reading Kicking It, but I’m cheating when I tell you this because I actually have a story in that urban fantasy anthology, LOL. But I was dying to read the other stories by great authors like Faith Hunter, Rachel Caine, and Shannon Butcher, and many others. I’m honored to be in the collection!

Blurb for Only the Good Die Young…

You know the theory that ghosts are energy trapped when someone dies violently? It’s true. I know it for a fact…

My name is Jensen Murphy, and thirty years ago I was just an ordinary California girl. I had friends, family, a guy who might be The One. Ordinary—until I became a statistic, one of the unsolved murders of the year. Afterwards, I didn’t go anywhere in pursuit of any bright light—I stayed under the oak tree where my body was found, and relived my death, over an over. So when a psychic named Amanda Lee Minter pulled me out of that loop into the real world, I was very grateful.

So I’m now a ghost-at-large—rescued by Amanda (I found out) to be a supernatural snoop. I’m helping her uncover a killer (not mine—she promises me we’ll get to that) which should be easy for a spirit. Except that I’ve found out that even ghosts have enemies, human—and otherwise…

6 thoughts on “An Interview with author Chris Marie Green”