Check out the great new covers for Jennifer Zane’s romantic comedies! To share the love with all my fans, Gnome On The Range is free 11/20-11/24. I love to hear from readers, so please read, review and comment! 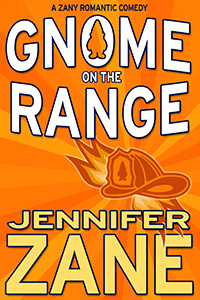 Available in e-book from Amazon and All Romance eBooks
Paperbacks available just about everywhere, online.

BLURB:
Once you get the zing you can’t go back.

Jane West has everything a woman could want. A job in a small Montana town’s only adult store, two busy young boys and one dead husband. Everything except a little excitement–a little zing. But that changes one summer morning at a garage sale when her kids buy some garden gnomes.

Now someone wants those gnomes and will let nothing get in their way. Including Jane. This new excitement for Jane spells trouble for a relationship with new neighbor–and hot fireman–Ty Strickland. Can Jane and Ty handle a relationship meddling mother-in-law, crazy kids, and stay alive while trying to solve the mystery of the garden gnomes? 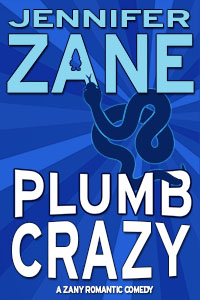 a mother bear and her two cubs walked down Willson right in front of the store the week before it opened. She called it fate. Or it could have been because her name is Goldie, so it made sense. I started working for her when my husband died, a temporary arrangement that helped her out. Three years later, things had turned long-term temporary.
The store was tasteful considering the offerings. The walls were a fresh white, shelves and displays just like you’d find at the typical department store. Then tasteful made way for tacky. Gold toned industrial carpet like you’d see in Vegas, a photo of a naked woman sprawled artfully across a bearskin rug over the counter. A sixties chandelier graced the meager entry. Goldie had to put her unique stamp on things somehow.
It wasn’t a big store, just one room with a storage area and bathroom in back. Whatever she didn’t have in stock—although you’d be amazed at the selection Goldie offered in such a small space—we ordered in. Montanans were patient shoppers. With few options store-wise inBozeman, most people ordered everything but the basics from the Internet. There’s one Walmart, one Target, one Old Navy. Only one of everything. In a big city, if you drove two miles you came across a repeat store. Urban sprawl at its finest. Not here, although there were two sets of Golden Arches. One in town and one off the highway for the tourists who needed a Big Mac on the way toYellowstone. The anchor store of the town’s only mall was a chain bookstore. No Nordstrom or Bass Pro Shop out here. You shopped local or you went home.
In the case of the woman in front of me, I wished she’d just go home.
Don’t get me wrong, I liked helping people and I’m comfortable talking sex toys with anyone. But this time was definitely different. Big time.
Behind Miss Waffler stood a fireman. A really attractive, tall, well muscled one wearing a Bozeman Fire T-shirt and navy pants. Can you say hot? A hot man in uniform? Yup, it was a cliché, but this one was dead-on accurate. He’d come in while I was comparing the various dildo models before I went into the perks of having rotation for best female stimulation. The first time.
“Can you explain the features of each one again?” Miss Waffler had her fingers on the edge of the glass counter as if she were afraid to touch them. Petite, she was slim to the point of anorexic. Her rough voice said smoker, at least a pack a day. Her skin was weathered, either from cigarettes or the Montana weather, and wrinkles had taken over her face. She’d be pretty if she ate something and kicked the habit.
I gave her my best fake smile. “Sure.”
I darted a glance at the fireman over the woman’s shoulder. Sandy hair trimmed military short, blue eyes, strong features. Thirties. A great smile. He seemed perfectly content to wait his turn. If the humorous glint in his eye and the way he bit his lip, most likely to keep from smiling, was any indication, he was clearly enjoying himself. A radio squawked on his belt and he turned it down. Obviously my lesson on sexual aids was more important than a five-alarm fire.
Miss Waffler was completely oblivious of, and unaffected by, the fireman. I now knew why she wanted a dildo.
I picked up a bright blue model. “This one is battery powered and vibrates. Three settings. Good for clitoral stimulation.” I put it down and picked up another. “This one is glass. No batteries, so it’s meant for penetration. The best thing about it is you can put it in the freezer or warm it and it provides a varied experience.”
The woman made some ah sounds as I gave the details. I went through all the possibilities with her one at a time. I got to the tenth and final model. “This one is obviously realistic. It’s actually molded from the erect penis of a porn star. It’s made of silicone and has suction cups on the base.”
Fireman peered over the woman’s shoulder as I suction cupped the dildo to the glass counter. Thwap.
“You can attach it to a piece of furniture if you want to keep your hands free.”
Both fireman and Miss Waffler nodded their heads as if they could picture what I was talking about.
“I’ll take that one,” she said as she pointed to number ten. The eight inch Whopper Dong.
“Good choice.”

I rang up Miss Waffler’s purchase and she happily went off to take care of business.
And there he was. Mr. Fireman. And me. And dildo display made three.
“Um…thanks for waiting.” I tucked my curly hair behind an ear.
“Sure. You learn something new every day.” He smiled. Not just with his mouth, but with his eyes. Very blue eyes.
Right there, in the middle of my mother-in-law’s sex store, dildos and all, there was a spring thaw in my libido. It had long since gone as cold as Montanain January. Who could have blamed it with all of my dead husband’s shenanigans? But right then I felt my heart rate go up, my palms sweat from nerves. The fireman didn’t seem the least bit phased by my little sex toy talk. I, on the other hand, was having a hot flash like a menopausal woman just looking at him.
“I’m Jane. What can I help you with today?” Hi, I’m Jane. I’m thirty-three. I like hiking in the mountains, cross-country skiing, I’m a Scorpio, and I want to rip that uniform off your hot body. I wiped my sweaty palms on my shorts.
He laughed and held out his hand. His grip was firm, his skin warm and a little rough. “Ty. Thanks, but no toys for me.” A pager beeped. He looked at it briefly and ignored it.
“Don’t you need to answer that? A fire or something?” I asked.
“Cat up a tree,” he joked.
I laughed, and heard my nerves in it. I took a deep breath to try and calm my racing heart. It didn’t work. All it did was make me discover how good he smelled. It wasn’t heavy cologne. Soap maybe. I didn’t really care if it was deodorant. He smelled fabulous.
“Actually, it was for station two. I’m here for your fire safety inspection.” He placed papers on the counter. Had he been holding them all this time? I hadn’t noticed. For the next fifteen minutes we went over fire inspection paperwork with an elephant in the room the shape of a dildo.

4 thoughts on “Excerpt from GNOME ON THE RANGE”