Hi, Cynthia, thanks for having me again! I’m excited to share The Dark Huntsman, A fantasy romance of the Black Court with your readers and to be a guest on your blog. 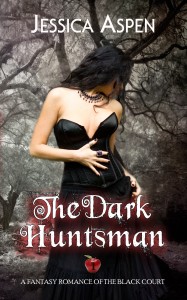 When I first conceived of twisting fairy tales, few people were doing it. Shows like Once Upon a Time and Grimm were far off and everything was about vampires. Much as I like vampires, I wanted to do something different, so I decided to write a story that combined all the things I love: fairy tales, tall sexy elves, and real heroines.

I say tall elves, because my elves are like those hot, strong, Tolkien elves we saw in the Lord of the Rings movies. Yes, they have pointy ears, but they are also fearsome warriors and amazing men. That’s my kind of elf! I’ve read fantasy for as long as I can remember and back in the day I read books where the land of the fae intruded on our lands. Evil crept in and with it the amazing white knights to fight it. That’s why I wanted to incorporate a fae note into my fairy tale twists.

Of course if you are going to have supernatural men who are strong and fight evil, you should have romance. And I love romance. It’s another of those genres I’ve read for years. Combine fantasy with romance and you have my favorite kind of read; hot, dark, and intriguing.

If you like fantasy romance, are willing to take a risk on an adult fairy tale, and enjoy sexy men who walk on the dark side of the knife, you’ll enjoy The Dark Huntsman. Dare to discover your imagination.

The Dark Huntsman:
A fantasy romance of the Black Court

An evil queen, a dangerous man, and a witch, tangled together in a tale of Snow White…

Desperate to save the last of her family from the murderous Faery Queen, Trina Mac Elvy weaves a spell of entrapment. But instead of a common soldier, the queen has released the Dark Huntsman, a full blooded fae with lethal powers.

Caged for treason, Logan Ni Brennan, is ready to do anything to win free of the manipulative queen, even if it includes running a last errand for her…murdering a witch. The sight of Trina, ready to fight despite the odds, gives him another option: use the witch as a chess piece, put the queen’s son on the throne, and bring down the queen forever.

As the queen slides into insanity and her closest advisor makes plans to succeed to the throne, Logan secrets Trina away in the enchanted forest and makes a decisive move in his dangerous game of manipulation. But the gaming tables of fate turn on him, and when Trina’s life is threatened he discovers he risks more than his freedom…he risks his heart.

Sudden light burned into Logan’s face and his eyes flinched shut. He forced his shaking arm up and hid behind it as he tried to remember where he was. Cold seeped into his aching body from the uneven stone floor. He stayed under his arm and hid from the torchlight, staggered at the realization that he was alive. Weak, wobbly, and defenseless. But alive.

A heavy hobnailed boot kicked him in the side. “Here ‘e is sir.”

He groaned and curled into a ball, peering up through long matted and tangled hair at a heavyset chuckling troll with only one working eye. “I got ‘im out of the hole yesterday, but ‘e’s still not in good shape.” Another rusty laugh came from the troll. “But I guess that’s to be expected after fifteen year’n the hole.”

Fifteen years. Had it been so long?

Logan barely heard the troll’s dissertation on oubliettes, prisoners, and rates of death. Had he been in hibernieth, the Elvetian form of stasis, for fifteen years? What had happened to his friends and family? What had happened to the prince between now and the day their world had collapsed? The day he’d been stuffed into his tiny damp prison?

He pushed up on burning arms, collapsing in a panting heap. The troll laughed and kicked him again. Logan lay on the hard stone mentally apologizing to his clan and liege for his weaknesses. He had no strength to face whatever death was to come. His fate was sealed.

“Is this the best you could do?” A sharp male voice cut into Logan’s ears, too used to the sound of silence. “He doesn’t even look like a lord, let an alone the murderous Huntsman. The queen thinks he’s a fricking miracle worker.”

“Nope. No way.” Another chuckle wheezed out. “If you send me down a healer, might be we could get ‘im fixed up by afternoon, good as new. Then the queen can do with ‘im as she likes.”

“Hmph” came from beyond the glare of the torches. Then a sigh. “All right. I’ll send someone. Fix him up.” The voice curled in disgust. “And be sure to wash him. He reeks.”

“Yes sir.” The troll dragged Logan across the floor by one arm. He hummed a tuneless something that screeched into Logan’s ears but couldn’t cover the sound of Logan’s shoulder joint popping out of place.

Pain ripped through him. He struggled to stay conscious and ignore the excruciating messages shrieking in his arm from being hauled like a sack of grain along the rough floor. The troll dropped him on the stones, paused and opened an iron bound door. Logan tried to make his stiff muscles work, managing only to scrape and bang his limbs on the doorframe as the troll seized him and shoved him into the cell. He landed hard, his face grinding into the slimy stones. Curling instinctively into a ball, he managed to protect his gut from the last hard kick of the troll’s boot landing on his dislocated shoulder. His lungs seized up, his vision went black, and his head exploded into bright white stars.

He sucked in slow aching breaths as the heavy footsteps receded down the corridor and reminded himself that he’d be out soon. And then he’d face the queen.

Fifteen years in this hell hole and the bitch thought he’d bow to her wishes.

He worked at unclenching his muscles. First his fists, then his jaw. Then each sore and aching muscle until he could sit up, his left arm hanging at an awkward angle. He guessed he wasn’t as ready to die as he’d thought. His body might be in terrible shape, but his mind was still sharp. He’d do what he had to do. Kill, cheat, steal. It wasn’t as if he hadn’t crossed lines before. But this time…

This time he would take down the Faerie Queen of the Black Court. No matter the price he paid. He reached up with his right arm, got a good grip on his left triceps and pulled. The shoulder ground and popped back into place, and Logan passed out from the pain.

Jessica Aspen has always wanted to be spirited away to a world inhabited by elves, were-wolves and sexy men who walk on the dark side of the knife. Luckily, she’s able to explore her fantasy side and delve into new worlds by writing paranormal romance. She loves indulging in dark chocolate, reading eclectic novels, and dreaming of ocean vacations, but instead spends most of her time, writing, walking the dog, and hiking in the Colorado Rockies.

Join the Jessica Aspen mailing list! Get the scoop on new releases, sales, plus the chance to win ARCs and participate in special giveaways. When I send you an email, there’s always something in it for you! http://eepurl.com/zs4Sj