Please help me welcome Guy Ogan to my blog today.

Yes, I was an officer in the U.S.A.F. for over 20 years, mostly working in logistics. After completing a second masters degree I set up a clinic working with children, adolescents and adults with Attention Deficit and taught psychology and sociology at a local college and university, then went to work for the State of Texas in Criminal Justice, as a psychologist. All of these careers required a good deal of writing; however, they used very specific formats so I’m not sure how well they helped in writing my novels.

In my teens I started writing about my love of long distance running and sent articles to “The Long Distance Log” and several other running related publications which used all the articles I sent. At college and university I had to do a lot of writing and also loved writing and submitting photographs of car shows I attended to “Cruising Style Magazine.” In the Air Force and later in criminal justice I did a lot of professional writing, still finding time to write a clinical book on the assessment and treatment of ADHD. If anyone had told me I’d someday be writing Paranormal-Romance novels I would have certified them as delusional! LOL

Tell us about your current WIP.

My, “Immortal Relations Coming Out” starts with my guardian vampires discussing coming out to the human populations. After stopping a war between Communist China and the Russian Federation, keeping it from going nuclear, as well as solving serious ecological threats, the good vampires consider the possibilities of informing humans of their existence. The hope is that coming out will allow the guardians to work more closely with them to safeguard humans from the evil type of vampires, as well as human criminals and evil governments seeking to enslave their peoples. Things spiral out of control when the would be dictators spin the fact that vampires exist to frighten people into giving up their rights and giving those in power total control. A potentially Extinction Level Event, forces humans to rethink the situation as only the vampires can save mankind. Also introduced is a very young and inexperienced shape-shifter “wolf,” who falls in love with the young hybrid human-vampire granddaughter of two of the main characters. As with the previous novels, there is a good deal of “explicit togetherness,” so the novels are geared to an adult audience. 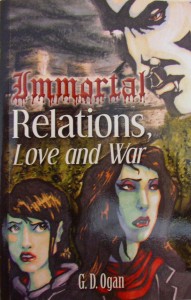 I absolutely love to write about my characters and the interesting situations they get into while trying to safeguard mankind! The calling I felt to write the first book, when I found out that my late father had had a tryst immediately after WW-II, would probably make an interesting research paper for a psychological journal. I loved writing it and the second book and am enjoying working on the third in the series now.

It is after the books are published (print and Kindle) that the “less than fun part” commences. Trying to get exposure for the books is difficult at best…fortunately there are great people who have blogs, such as this one, who offer new authors a place to spotlight their books. 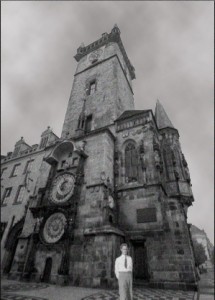 Gary Logan finds a World War II Era Photograph of his late father in front of an ancient building. On the back of the picture his father had written Prague, Czechoslovakia; however, underneath, in a feminine hand was, “I’ll always be waiting here.” This shocked Gary into remembering things his mother had said when he was a child, “He is over there with that woman” and “He has had a child with her!” As a young boy, Gary had no understand of who those comments were about; however, the anger in his mother’s voice caused what she said to remain in his subconscious. Now, Gary goes to Prague to see where his father had worked and possibly find out more, but what he finds instead is a lovely young lady who seems to know too much about his father. Gary is confused but it isn’t long before he falls in love, even though he recognizes she is much more than what she seems. Thus begins an extraordinary journey of epic proportions. Exciting, erotic, and full of heart-stopping action, this debut novel turns human vampire lore on its head and despite lurking dangers, creates a symbiotic relationship between the two species that deepens emotional connections to astonishing effect.

My blogspot is, http://immortalrelations.blogspot.com/ and I’m also listed at http://www.amazon.com/author/guyogan

Where can readers find your books?

6 thoughts on “An Interview with Guy Ogan”