Today’s guest is Jill Hughey, author of four historical romances, three of which comprise the Evolution Series. Her newest release is Vain. We’ll talk about that soon, but first of all, to break the ice a little, what is your favorite dessert/food?

I have a real weakness for beverages. I have to have at least one cup of decaf coffee in the morning, a cup of caffeinated in the afternoon, and I really enjoy a glass of red wine in the evening with some dark chocolate Hershey’s kisses. 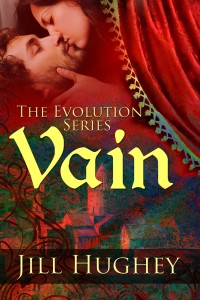 Where do you get the ideas for your stories?
Usually I get one scene in my head that introduces me to the hero and heroine. For example, the first book in my series began with my seeing the hero, David, saying “I want to see her face.” He stood diagonally behind a woman who was kneeling in a room crowded with men, her veil blocking his view of her profile. Around that I created the scene where Rochelle is being interviewed by the emperor. That line of dialogue never occurs in the finished book because the story didn’t support them meeting for the first time at the palace, but the seed for my Evolution Series was planted.

Tell us about your the series.
I chose Charlemagne’s empire as the setting, during the rule of his son, Louis, because it offered the societal structure that romance readers like while being completely separate from England or Scotland, which have been pretty well covered in the genre. The empire was unstable during the 830s. There were three civil wars in one decade because Louis’s sons by his first wife did not want to share the empire with a son he fathered with his second wife.

Each one-word title in the series describes the hero. I know titles can be hard for authors to choose, but these were easy.

The first book, Unbidden, begins in 831 when Louis has just regained his throne. He is determined to place a loyal soldier at a strategic location, which sets the stage for the relationship between David, the soldier and second son of a nobleman, and Rochelle, the heroine who doesn’t really want a soldier at her estate, much less a husband.
In Redeemed, the villain of the first story, Doeg, who is also David’s brother, strives to become a more principled man. He seeks a wife only for her housekeeping skills, but the quiet widow he chooses wants more in return than he ever expected to give. Doeg is a tortured hero and probably one of my favorite creations.

Vain is set in 839. The male lead is David’s best friend, Theophilus (usually shortened to Theo). He is a nobleman in the thick of the political intrigue. He finds himself responsible for a very talented female tailor. They discover a mutual interest in fine cloth and unique garments, while trying to ignore a physical attraction that neither intends to act on. The premise for this relationship originated from the first book in which Theo says “I have my heart set on a woman who can sew. I would save a fortune.” At the time, I had no idea I would be plotting his happy ending, but that statement of his led me to lovely Lily.

Please tell my readers a little bit more about your new book, Vain.

This is the back cover blurb:
Lily had her life planned, neat and tidy as thread on a spindle, until her mother died and her father snipped at the seams of her future by abandoning Lily in their shop. A nobleman unexpectedly gives her hope when he brings fabric for a special garment. Lily survives on his first payment, and immerses herself in sewing and embroidering an incomparable tunic for him, as her tidy plan continues to unravel.

Theophilus, Lord of Ribeauville, takes his responsibility to his townspeople seriously and, therefore, does not dally with local women. Desire wars with duty when Lily glances up at him while adjusting the hem on his Easter tunic. As her deteriorating circumstances push them together, Theo and Lily learn that the path to his heart just might be through his wardrobe, though the exquisite outfit she creates is the only part of her that fits in his precarious aristocratic world.

Do you prefer to read in the same genres you write in or do you avoid reading that genre? Why?
I love to read historical romance though I do not read it when I am actively writing a story because I tend to pick up little dialogue quirks or other cues from the author I’m reading. I don’t listen to music while I’m writing either, for the same reason. I guess I am just too suggestible.

Give us an elevator pitch for your book.
A tailor’s abandoned daughter fashions a vain nobleman’s tunic, finding passion between the neckline and hem as misfortune forces her into his precarious aristocratic world.

Vain is available from Amazon (kindle and print), Barnes and Noble, Kobo, and most other online book vendors.

If you want to keep in touch with Jill, she writes a blog, has a Facebook page, and tweets @jillhughey.

Thank you, Cynthia, for letting me visit with you today! I’d love to give a Vain ebook away to one commenter.

SETUP of the EXCERPT – Lily has been searching for a way to support herself since being abandoned by her father and taken into the household of Theophilus, Lord of Ribeauville. Lily and Theo both have excellent taste in clothing, and the woman Lily has criticized is also the woman Theo thinks he is going to marry.

BEGINNING OF EXCERPT
“I heard you were went to the market today,” Theophilus stated.

“Yes,” Lily almost cheered, so proud of her accomplishment she did not question his knowledge of her whereabouts. “I sold my cloth and bought raw wool so I can make more. I think I can take care of myself doing this.”

Her lord crossed his arms over his chest as he paced a short distance away. “I have been meaning to talk to you about your future. One of my guests may have a position for you, as a seamstress for her household.” He turned to look at her. “You would be wise to consider it.”

Lily tried to force herself to be smarter than she felt. She did not really want to leave Ribeauville. She did not want to be a servant. “It is not the woman who questioned me the other day, is it?” Lily blurted.

“No. What difference would that make?” he inquired.
Lily scuffed her foot in the gravel before the bench. “She does not like how I make clothes.”
“She likes your insolence even less,” he replied stiffly.

“Do not pretend you do not know what I mean. Telling her her clothes said she had a rich father,” he groused. “She recognized the insult, Lily.”

Lily stared up at the moon for a minute, unwilling to back down even if embarrassed by his chiding. “I have seen her on other days dressed very well, but you know as well as I do her tunic on Monday was hideous,” she informed him.

Theophilus gaped at her then burst into unwilling laughter.

“There was so much of it,” Lily explained. “Today’s blue looked very nice on her. I would not have added the dagging at the hem, though I can see how she might need the variety with so many outfits to decorate.”

He laughed again. “Lily, I know you have an excellent eye for clothing. It is your tongue you must learn to control.” He became stern and walked forward to stand over her where she still sat on the bench. “Rotruda is Fastrada’s friend. She needs a steady seamstress for her growing family. She will not tolerate your opinions as I have done. She will not want you to decide her necklines should not be square, even if she would be wise to let you dress her from head to toe.”

His compliments combined with the possibility of hiring out as a disregarded servant curdled her thoughts like sweet milk ruined with vinegar. How could she accept that her talents, of which her lord thought so highly, were to be used to sew mundane clothing for a family who would probably never appreciate her? If she worked quietly and without opinion they would not remember she existed, which is exactly what they wanted. Lily saw how the servants in the shed moved in and out of their masters’ daily lives like specters put on earth to haul and clean and organize as inconspicuously as possible. Some were treated better than others. Lily suspected that the very pregnant, very superior Rotruda would not be a generous mistress.

“I think I will stick to my plan of weaving. With the wool I bought today, I should be able to make enough to rent a small room. I will get out from under your feet as soon as I can, my lord.”

He reached out to touch her shoulder. His heat pulsed through her linen tunic. She scuttled off the bench to stand behind it.

“I am sorry,” he bit out. “I intended only to comfort, not to seduce.” 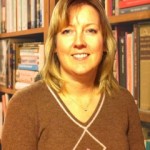 AUTHOR BIO:
Jill Hughey has loved historical romance since sneaking peeks at her mother’s library years ago. She has enjoyed writing just as long. She prides herself on deep character development, and settings that take her readers on long, satisfying journeys to places they have probably never been in a book before.
Jill lives in Pennsylvania with her husband and two sons. Her hobby is singing lessons, in which she studies classical soprano and some lighthearted works.

12 thoughts on “An Interview with Jill Hughey”