Please help me welcome Misha Crews to my blog. Misha will be giving one commenter complimentary copy of Homesong in their choice of format, as well as a gift card to Starbucks. So be sure and leave her a comment so you can be entered in the drawing.

Hi Cynthia! Thanks so much for having me on your beautiful blog! It’s a real pleasure to be here. 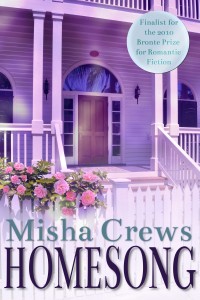 My first writing project was when I was about seven or eight. It was actually a full stage show (put on by myself and my friends, at a premium ticket price of 25 cents each). We had jokes, songs, and even clowns! It played to a packed house of four grownups. I had my taste of creativity, and I was hooked.

Tell us a little about yourself and your latest book.

Well, my most recent release is actually a re-release of my first novel, Homesong. It’s a multi-generational story about a small town called Angel River, Virginia, and it’s told from the perspective of two childhood sweethearts who are reunited on a Caribbean cruise. It was originally published in 2008, and was a finalist for the Bronte Prize for Romantic Fiction. I’m really tickled that it’s available again on Kindle, and is coming soon in Nook and paperback (yay!). In fact, one commenter on this blog will receive a complimentary copy of Homesong in their choice of format, as well as a gift card to Starbucks. (Yay again!)

I refuse to answer on the grounds that it may… oh, heck with that. It depends a lot on the person and the circumstance. There’s no denying that parts of people I know – gestures, mannerisms, etc. – end up in my writing. That’s part of the fun of it!

Getting to know the characters. Each book is like making a whole new set of friends: learning their stories, what their families are like, what makes them laugh and so on.

Getting my new friends into trouble! I hate putting my characters through unhappy times, making them suffer. But at least I also get to take them through to their happily ever after (at least, most of the time!).

When I first started reading I was a total mystery addict. Nowadays I’m drawn to romance with a touch of mystery, especially stories that have gothic elements. But really I’ll read anything! As long as it’s well-written and interesting, no genre is out of the question.

That’s an interesting question! There have been times when I haven’t wanted to read in my genre, because I was afraid I’d be influenced too much by other writers and wouldn’t be able to create an original story. But these days I enjoy reading the genre that I’m working on, because it puts me totally in the mindset of what I’m writing, even when I’m relaxing.

Well, I had so much fun reviving Homesong that I decided to spend some more time in the fictional town of Angel River. There’s a quartet of novellas in the works, with some new characters (and a few old friends). All four novellas will be out in 2013. 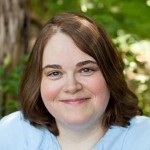 Raised in a family of book lovers, Misha’s mother first encouraged her to read by offering to pay her two cents per page of Hop on Pop, by Dr. Seuss. At first Misha was happy just to be raking in the cash, but before long she traded the pennies for the riches of the written word, and since that time she’s seldom been seen without a book in her hand, in front of her nose, or at the very least in her purse! Misha is married and is currently living and working in Northern Virginia. She welcomes messages about writing, reading, workshops, ice cream, antique typewriters, stuff that make you laugh, etc., and can be contacted via her website: MishaCrews.com

In a small town, everyone knows everything about everybody. Or do they?

For twenty years, Kate Doyle has been haunted by the night when she was forced to flee from her tiny Virginia home town and abandon her childhood sweetheart, Reed Fitzgerald. So when Kate, now in her mid-30s, escapes her unhappy life in Washington, DC and takes a much-needed vacation, the last thing she expects is to be reunited with Reed. Now, under the warm clear Caribbean sun, amid ancient churches and pink flamingos, Kate and Reed seek to revive the love that they thought was gone forever.

But will small-town secrets ruin their last chance for happiness? Woven into the modern tale of Kate and Reed are the tales of those who came before them. Their mothers: teenagers in the chaotic 1960s, best friends who are in love with the same man, although only one of them knows it. Reed’s grandmother: already a bitter old woman by the 1930s, she would do anything to carry on the family name…and would drive away anyone who came between her and her grandson. And even the founder of the town: in 1865, what guilty secret drove one man to bring his two daughters across the ocean from Ireland and settle in the dark Virginia hills?

At its heart, Homesong is the story of a small town: its lies and truths, its beginnings and endings. It’s about proud secrets, unrestrained joy, and the old adage that you may leave your home, but it never really leaves you.

It was dusk when they finally returned to Bonaire Horseback Tours. The day had been long, hot, and sticky, but the scenery was beautiful, and the tour had been very entertaining.

When Kate dismounted and waved a final goodbye to Stacy, she was amazed by how tired and sore she was. She had forgotten how strenuous horseback riding could be. And she wasn’t alone in her exhaustion. The entire group was silent with fatigue as the transport lumbered back to the ship.

Hot breezes blew through the gathering dark, spiced with the smell of tropical dishes and ringing with the distant sound of music. It made Kate long to wander the city and find the sources of those enticing sounds and smells. But by the time they got back to the ship, all she wanted was a hot shower, a bite to eat, and a long night’s sleep.

Then Reed gazed down at her with those soulful, luminous eyes. Holding her hand, he murmured a suggestion, and Kate found herself nodding in agreement. She trailed after him to his stateroom, and ten minutes later, she was soaking in his whirlpool bathtub, up to her chin in fragrant, frothy water. She had closed her eyes in modesty as he showered in the frosted glass stall adjacent to the tub, and had promptly drifted into a doze.

The sound of the shower turning off roused her, and she rubbed her face with wet hands as she struggled to stay awake. “I have to warn you,” she called. “I’m falling asleep out here.”

“Don’t worry,” he called back. “The bath balm will help with that.”

He opened the door and stepped out, a long towel wrapped around his waist. Although she knew he couldn’t see through the frothing water, she folded her arms discreetly over her breasts as he stood looking down at her.

The motion wasn’t lost on him. He knelt beside her and stroked her cheek, intensely aware of how close together they were. The steam from the shower enveloped them, combining with the scent of the bath to form a heady fog that seemed to draw them together.

“Lemon and peppermint for energy,” he answered softly. “Epsom salts and baking soda for tired muscles.”

She felt herself blush as if he had propositioned her.

He let his finger slide along her jawbone and down her neck, pausing as he traced her collarbone. A few inches more and his hand would disappear under the frothy water, slide under her sheltering arms and cup her breast.

He could imagine how soft her flesh would be there — warm from the water, her nipple pressed against his palm. His mouth went dry at the thought, and he couldn’t quite get his breath.

He could see the pulse beating hard in the hollow of her neck, and he knew she wanted his hand to drift under the water, wanted his fingers to wander where they would. A smile ghosted around his lips. When his eyes met hers, they were bright with longing.

Reed stood up. Kate swallowed hard and struggled to pull herself together. His touch on her damp skin had been achingly gentle, sending hot chills rushing over her. She’d had to fight to keep herself from dragging him into the tub, towel and all.

19 thoughts on “An Interview with Misha Crews”