I’m excited to be guest blogging with Cynthia Woolf today! In honor of the occasion, I’m giving away a book. One lucky commenter will win a copy (Paperback or eReader-winner choice) of The Pendant’s Promise and an Amazon gift card. Check at the end of the interview for details. 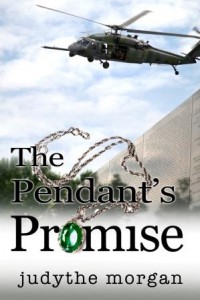 1. What did you want to be when you were a child? Did you always know you wanted to be a writer?

JM: I’m something of a Peter Pan when it comes to what I want to be when I grow up. I practiced for hours with a stick horse and upside down buckets in my back yard during my I-wana-be-a-barrel racer stage. Then I wanted to be nurse-and ended up married instead. Then I wanted to be a Department of Army civilian (DAC). That’s someone who’s not in the military but works for the Army. Next, I did some time as a public school teacher. At the same time, I owned and operated an antiques shop. I still dabble in antiques and estate liquidations.

I never verbalized I wanted to be a writer. I simply wrote. With Irish storyteller genes, how could I not?

2. How did you get started writing?

JM: I often wish I’d started writing for publication sooner. I’m always quite humbled when I see my work in print and readers tell me how much they enjoy my stories.
For years, I wrote newsy letters from all the wonderful places I’ve lived and yearly Christmas letter memoirs. I wrote articles about things I’d seen and done. I wrote professional articles. Finally, at the insistence of family and friends, I started submitting short stories and publishers bought them.

Encouraged, I joined Romance Writers of American and American Christian Fiction Writers, worked on my writing skills and started adding depth and length to my stories. The rest, as they say, is history. My debut novel THE PENDANT’S PROMISE released last spring for eReaders and this summer in paperback.

3. What inspired your latest book?

The idea for THE PENDANT’S PROMISE germinated from my time as a DAC in South Korea.
In 1966, the US Army sent my husband to South Korea. Unwilling to be left behind, I secured a passport for myself and our toddler daughter, sold our car, bought airline tickets and followed. At barely twenty-one, I didn’t think about negative possibilities of being an unauthorized dependent in Southeast Asia. I only knew I didn’t want to be away from my husband for thirteen months.

4. What is your next project and when will it be released?

5. How likely are people you meet to end up in your next book?

Very. But not specific identifiable people. And, never, ever, without permission.
You’ve seen that tee shirt, “Be careful or you’ll end up in my novel.” That’s me!
What happens is an occasional overheard word from a loud person behind me in a restaurant or snippets of others’ conversations while waiting in line serves as the impetus for a story idea. The phrase “in one ear and out the other” does not really apply for any writer, especially me. Instead, it’s more like “in one ear and disappear until needed.”

6. What is your favorite part of writing?

Writing is by its very nature an isolated endeavor. That’s a problem from some. Not me, I love the separation when I’m working on a project. The quiet. An alternate world plays in my head like a movie in a dark theatre and I’m anxious to know how the story will unfold.

7. Do you have any words of inspiration for aspiring authors?

STUDY the craft of writing. There are outstanding workshops available from gifted publishing professionals. Email me if you want my personal recommendations or check the writer’s resources page on my website.

Be PROFESSIONAL especially on social media. Publishing is a big, small world. That six degrees of separation can come back to bite you.

And, last, BELIEVE in yourself. NEVER give up. I love R. Marston’s quote: “…giving up is simply not an option.”

EXCERPT from chapter one:

In the weeks following Mack’s death, Lily made regular weekend trips from her home in Oak Ridge, Tennessee, to Virginia helping Aggie with disposing of Mack’s things. She gulped back tears and tugged on the handle of the file cabinet drawer in Mack’s office. The sound like chalk on a blackboard screeched around the room. The difficult process had her thinking too much of Ace. When she lost him, all she’d had were her pendant and an old sweater he’d left behind in her U.N. Village apartment in Han Nam Dong. The threadbare remnant was still tucked away in a carton in her attic. She should get rid of it.

Waiting for Aggie to join her, she removed a large box from the metal drawer and began rifling through the contents. She pulled out a yellowed White House invitation to the Presidential Reception at Walker Hill and photographs spilled across the desk. One caught her eye–a picture from her birthday party with the G3 gang. She studied the faces. Sam Ware, Mack’s executive officer at the time, looked so young. She’d thought him an old fogy like her daddy, but Sam remained a true friend. Same as Mack and Aggie, not judgmental.

That night at the resort’s Crane Restaurant had been her first sight of Ace. The brazen smile he’d given her when their group passed his table remained branded in her memory. Several times during the meal, his brown eyes stared and waves of awareness surged through her. But at that moment in her life, she’d had plans, places to go and things to see. South Korea was the beginning. The dinner celebration honored not only her nineteenth birthday, but her promotion. She was a women’s libber on her way to a career as a Department of Army civilian.

She tossed the picture on top of the others. She’d been young, so gullible.

“What’d you find?” Aggie joined her by the large mahogany desk.

“Stuff from when we were in Korea together.”

“I thought Mack tossed this stuff years ago.”

They dug through the photos and mementoes stored in the Army surplus file cabinet drawer, finding menus from restaurants and Officers’ Clubs, ticket stubs from the Seoul Zoo, museums, and pictures from weekend excursions around South Korea. Caught up in memories, they laughed and they cried, reminiscing about rides in Kimchee cabs, trips to Miss Kim’s dressmaker shop, and joked at pictures of Lily and Aggie in native garb of silk skirts and bright striped bolero-like jackets, and Mack in his Papasan attire with the wide-legged paji.

Lily found a photo someone had snapped in the G3 office. Ace’s back was to the camera, but she recognized him and knew Aggie would too. Not wanting to upset her, Lily buried the picture under others and knelt beside the open drawer. “Let’s see what else there is.”

A file stamped ‘Confidential’ lay beneath where the box had been. She moved the folder onto the desk, opening it. “I wonder what Mack kept in here.”

Aggie slammed the cover shut. “I think it’s time for a lunch break.”

Lily tilted her head in a questioning scowl. “Okay. I’ll go make us some sandwiches.”
Fifteen minutes later, she carried a tray with plates and iced tea into the glassed sunroom where Aggie waited. The blue morning glories Mack had planted along the cedar split rail fence so full and vibrant earlier were beginning to fade and close.

Aggie sat with her leg swinging at the wrought-iron table she and Lily had found on one of their forages at a nearby antique shop. Her foot stopped abruptly when she spotted Lily in the doorway.

“I love this room.” Lily set the tray on the glass tabletop. “Some of my favorite memories are how Mack pushed Beth on that swing set and raked leaves in high piles so she could jump into them.”

“Aye. He’d swing our Beth for hours. And when she didn’t want his help, he’d stay close by, weeding his flowerbeds in case she fell. He couldn’t bear for her or anyone else he loved to be hurt.”

Lily knew all about Mack’s protectiveness. He’d appointed himself her personal guardian the moment she’d walked into his office and guided her through the sea of military policies and procedures the whole time she’d worked with him. All the while running interference with over-zealous, admiring soldiers.

Except for one, she reminded herself.

“Great. She wishes she could join us more.”

“Afraid so. I’m not ready for my baby girl to be seeing any man seriously. Sending her into the big bad world of college was hard enough.”

Aggie patted her hand as Lily gathered their empty plates. “Give her time. Maybe she’ll be changing her mind.”

“I hope so. What’s on our agenda for the rest of today? More in Mack’s office?”
Color drained from Aggie’s face. “No. No more paperwork.”
“But what about the other two file drawers you need to go through?” Lily wanted this arduous task over. Finished. They both needed to move on.

Clearly agitated, Aggie pushed from the table. “I’ll take me time after you’ve gone home. Let’s clear out his uniforms and clothes and get them to the Ft. Belvoir thrift shop. That way, I won’t be driving over to the post by myself.”

Earlier, going through all the keepsakes from Korea, Aggie had seemed fine. Did her reluctance stem from overwhelming memories?

All the memorabilia had certainly stirred Lily’s recollection of her mystical, magical time in the Land of the Morning Calm, at the same time triggering thoughts of the maelstrom that followed and the consequences she and Aggie both lived with daily.

Thoughts that needed to be left buried.

Award-winning writer Judythe Morgan is also an antiques dealer, former public school teacher and one time Department of Army Civilian (DAC). But she’s a romantic at heart and storytelling is, and always will be, her passion.

Reality can be harsh and depressing. She loves creating stories that will touch your heart and end in a happily-ever-after. When’s she not writing, you’ll find her browsing antiques shops, reading a book on the front porch or walking her dogs . . . an Old English sheepdog named Toby and a Maltese named Buster. To learn more about her and her work, visit her at her website www.judythemorgan.com or her blog:

Thanks so much, Cynthia, for allowing me to share a little about me and one of my stories.

Be sure to include your email address in the body of your comment. One lucky commenter will win a free copy of THE PENDANT’S PROMISE (your choice paperback or e-version) and a $5 Amazon.com gift card. Winner will be notified by October 20!

22 thoughts on “An Interview with Judythe Morgan”